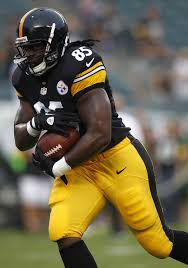 The Pittsburgh Steelers have activated tight end David Johnson from the Physically Unable to Perform, or PUP list today. According to the Steelers, he was scheduled to practice with the team at the their facility in Pittsburgh as training camp is officially over. He should provide a boost to a very weak position for the team right now.

The question is, how much of a boost will he provide?

Johnson has not played since last preseason when he suffered a torn ACL in the preseason. He then underwent a ‘clean-up’ procedure a few weeks back and has since been cleared to start practicing. During the absence of Heath Miller and Matt Speath, the Steelers have struggled at tight end and that’s being nice.

It’s very obvious to me that David Paulson remains a major work in progress in terms of his blocking. He was beaten soundly especially in straight-up blocking on Monday night in Washington and wasn’t much better when the team had him in motion. His receiving skills are solid and he has shown a knack for getting open and being able to move the sticks but he is a liabiltiy right now in the running game.

Jamie McCoy wasn’t much more successful as a blocker Monday but did look pretty good receiving as he grabbed a couple of passes and made plays after the catch to gain yards.

While Johnson will be an upgrade in terms of blocking, let’s remember that he hasn’t played in a year and has been used as more of an H-back in the past. This doesn’t mean he can’t immediately improve the situation, but let’s be a bit more patient than we have been with the offensive line shall we?