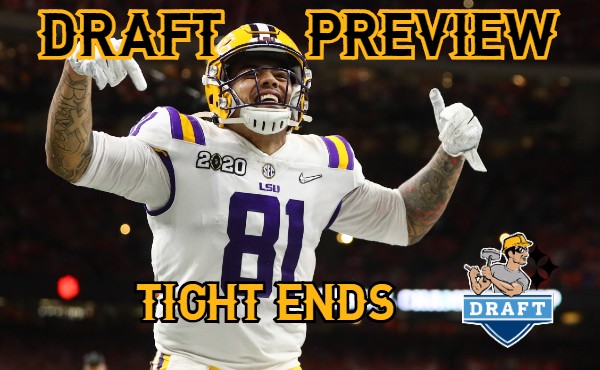 The 2020 NFL Draft is now less than a two weeks away. This year’s Draft will be like nothing we have ever experienced. Due to precautionary measures around the global pandemic of the coronavirus, the NFL will hold a virtual draft. Teams are not permitted to have their brass congregate in war rooms and most of the footage will be done through video and teleconferencing. The 2020 Draft was supposed to be a giant display of showmanship in Las Vegas, but instead will look like a high-end production of your beer league fantasy draft. As we have done the last few years, in the weeks leading up to the Draft we will be taking a position-by-position look at the Steelers roster and where their biggest needs lie in the Draft. We start by taking a look at the offense, which was statistically one of the worst in the league last year. The Steelers traded this year’s fifth round pick to Seattle last year to acquire Nick Vannett, who subsequently left in free agency for Denver. They added depth to the group by bringing in Eric Ebron in free agency.

Vance McDonald has the perception of being a player with availability issues, but he has only missed 3 games over the last two seasons. His production dropped off last year (mostly because of poor QB play), averaging just 7.2 yards per catch, the fewest of his career and a 5-yard decrease from 2018. The biggest signing the Steelers made in free agency was signing Eric Ebron who will be playing on his 3rd team since being drafted 10th overall by Detroit in 2014. Ebron’s best season came in 2018 playing with Andrew Luck when he caught 13 TDs, which is nearly half of his career total. Ebron’s career has been plagued by drops, but he is an athletic player capable of stretching the field and making plays over the middle. With McDonald and Ebron, this gives the Steelers two capable tight ends, so the need for drafting one is diminished. That said, neither is a great blocker and both have contracts that make them easy cuts after 2020 so if one of the draft’s top tight ends fell into the Steelers lap the potential for selecting one still exists because Zach Gentry flat out sucks.

With the top two tight end spots locked in for 2020, the Steelers do have bigger needs that could potentially be addressed. That said, just because they signed a player in free agency does not preclude them from selecting that same position in the draft. In fact, their top picks the last two years came at positions where they made a big free agent signing. In 2018 they signed Morgan Burnett in free agency then drafted Terrell Edmunds. Last year they signed Mark Barron and drafted Devin Bush. This is not a great draft class for tight ends, which very well could mean that no tight ends are taken before the Steelers pick at 49.

While this is not the strongest draft for tight ends, there are a few players that could develop into capable NFL talents. The top three in the class are generally considered to be Washington’s Hunter Bryant, Purdue’s Brycen Hopkins, and Notre Dame’s Cole Kmet (in any order). Dayton’s Adam Trautman got rave reviews for his performance at the Senior Bowl. Steelers Twitter would be over the moon if they were able to nab LSU’s Thaddeus Moss, the son of the great Randy Moss. Back before the days of quarantine, the Steelers did meet with Missouri’s Albert Okwuegbunam at the Combine, who is considered a later round prospect.