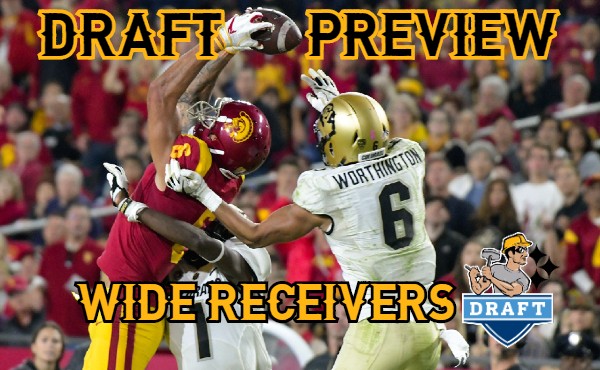 The 2020 NFL Draft is now less than a two weeks away. This year’s Draft will be like nothing we have ever experienced. Due to precautionary measures around the global pandemic of the coronavirus, the NFL will hold a virtual draft. Teams are not permitted to have their brass congregate in war rooms and most of the footage will be done through video and teleconferencing. The 2020 Draft was supposed to be a giant display of showmanship in Las Vegas, but instead will look like a high-end production of your beer league fantasy draft. As we have done the last few years, in the weeks leading up to the Draft we will be taking a position-by-position look at the Steelers roster and where their biggest needs lie in the Draft. We start by taking a look at the offense, which was statistically one of the worst in the league last year. With the departure of Antonio Brown, the Steelers receiving corps was inconsistent at best as injuries, drops, and poor QB play plagued the group all season.

James Washington led the team with 735 receiving yards last season. It wasn’t quite the “breakout” sophomore campaign many had projected, but considering the inconsistent play at quarterback it was a solid season. JuJu Smith-Schuster took over the #1 receiver role but battled a knee injury and later a concussion which caused him to miss 4 games. Rookie Diontae Johnson was the only receiver to play in all 16 games and ended the year with the most receptions (59). All three receivers were able to make big plays after the catch, but bad QB play limited them to averaging just 3 receptions per game. While the top 3 on the depth chart are set, the #4 and #5 receiver spots are open for competition. Deon Cain did enough last year to get a camp invite and Ryan Switzer will (much to the chagrin of Twitter) be back in camp again. Neither of them have a secure hold on a spot and adding more talent around Ben Roethlisberger is never a bad thing.

As discussed in the Running Backs preview, one of the things the Steelers offense lacked was a true home-run hitter. The top 3 receivers each produced occasional big plays after the catch (JuJu against San Francisco and Baltimore, Diontae against Miami, and Washington against Cincinnati). That said, the depth behind them is not great and the Steelers did not add any players in free agency, other than bringing back former Pitt star Quadree Henderson who may get another shot to win the kick returner job in camp. The Steelers have traditionally done a very good job scouting and selecting wide receivers in the middle rounds of the draft, so it would not be surprising to see them go that route once again. With the team seemingly going all-in for the last few years of Ben Roethlisberger’s career, it is highly likely they will be looking to load up on playmakers in this draft.

This draft is STACKED with wide receivers. This might be one of the deepest receiver drafts in years and it is entirely possible that 6 or 7 get taken in the first round. The Steelers will have no shot at players like CeeDee Lamb (Oklahoma), Jerry Jeudy (Alabama), Henry Ruggs III (Alabama) or Justin Jefferson (LSU). Receivers like Laviska Shenault (Colorado), Jalen Reagor (TCU), Denzel Mims (Baylor), Brandon Aiyuk (Arizona St) and KJ Hamler (Penn State) may all be off the board by the time the Steelers pick at 49. There are some quality players to be found in the middle of the draft that may interest the Steelers including USC’s Michael Pittman, Minnesota’s Tyler Johnson, and Michigan’s Donovan Peoples-Jones.