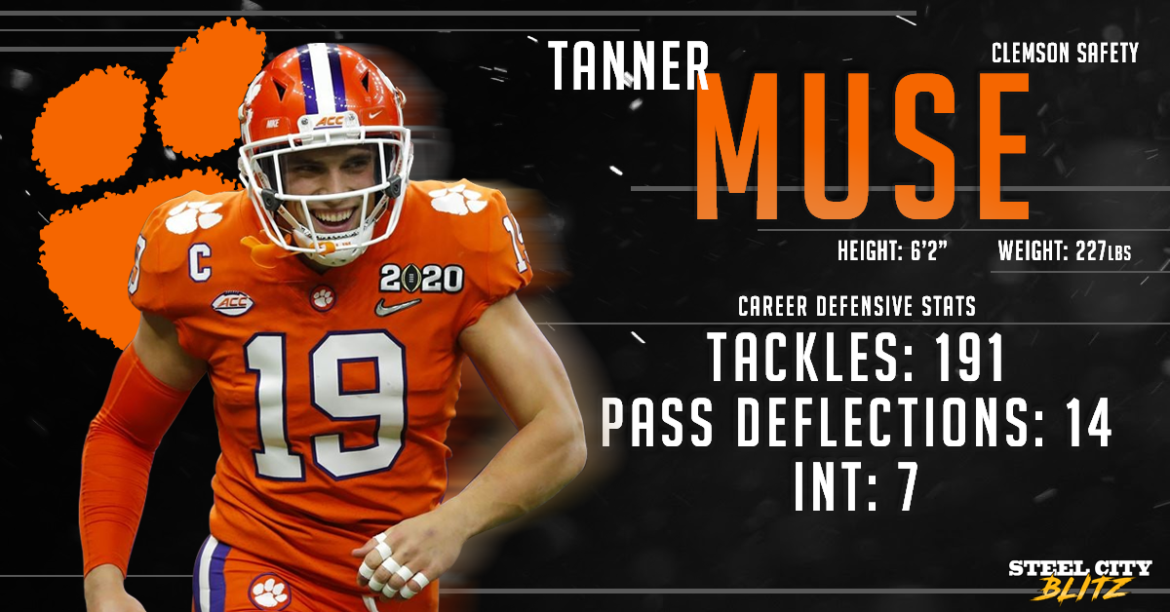 Due to concerns around the coronavirus outbreak, nearly all of the college pro days were cancelled this season. Before the cancellation, Mike Tomlin and Kevin Colbert attended one Pro Day – Clemson. It has been reported that the Steelers brass had dinner with Clemson safety Tanner Muse, which is likely their only player dinner of the draft season. We have heard in past years how important these dinners can be to seal the deal on a potential future draft pick (or in the case of Andrew Billings, make them never want to acquire him).

Tanner Muse hails from Charlotte, North Carolina where he played high school football and baseball at South Point High School. He was first-team all-state on defense as a senior and played center field on the baseball team before attending Clemson where he redshirted his true freshman year. Muse worked his way up from Special Teams as a redshirt freshman and saw a handful of snaps on defense, including recording the first Pick-Six by a Clemson freshman since 1989. He found the end zone again as a redshirt sophomore against Syracuse in a game where he had 10 tackles and returned a fumble for a TD. After seeing significant playing time his sophomore year, he became an anchor of Clemson’s defense, recording 76 tackles, 5 pass breakups, 2 sacks and 2 interceptions as a junior. He was voted a Team Captain as a senior and recorded 73 tackles, 5 pass breakups, 2 sacks, and 4 interceptions en route to being a Thorpe Award semifinalist. His 59 career games tied for the most in school history and he was a starter for 39 of those games, logging over 1900 snaps.

Tanner Muse is a SS prospect in the 2020 draft class out of Clemson.

Muse is a durable player who appeared in nearly every game since his redshirt freshman season. As a fifth year senior captain, he had a knowledge of the defense and was a vocal leader on the field. He reads the play in front of him well and was deployed as both a deep safety in Cover-2 alignments and in underneath zones, which will benefit him at the next level. He has the ability to read the play in front of him and work his way into position around the ball. Muse has excellent straight-line speed, as evidenced by his sub-4.4 40 yard dash at his Pro Day and displayed on tape when he ran down Ohio State’s JK Dobbins from behind in the CFP semifinal. Muse showed an ability to stick with tight ends across the middle and was a good form tackler when he had the opportunity to get to a ballcarrier.

Despite blowing up the athletic testing at the Combine and his Pro Day, it does not always show up on film. He can be a bit slow-footed in coverage, particularly when moving laterally or having to change directions. Against faster players, he will lag behind and needs to attack in straight lines. When coming down from a safety position, he will get to the box and stand up straight rather than staying in a crouched tackling position, waiting for the play to come to him rather than attacking a gap. Moving laterally is not his strong point and he can struggle to get off blocks, particularly when lined up in the box. It is worth noting that both of his 2019 interceptions came on tipped balls and did not come from him undercutting routes.

Muse is incredibly athletic for his size, but doesn’t always use it on the field. Having started his college career on special teams, he should be able to step in and contribute right away in that phase in the NFL. He won’t be a Day 1 starter in the NFL, and his best bet in the future is likely as a hybrid linebacker, possibly in sub package situations. At 6’2″ he has the size to add some weight to his frame and fill out from his current 227 pounds to the mid-230s. As a comparable from a size standpoint, Mark Barron was listed at 6’2″ 230 lbs last year for the Steelers. Teams will always gamble on players with high athletic upsides, so Muse will get drafted, but he is not a player you should expect to see on the field right away on defense. He did have a blocked punt on special teams at Clemson and is a good form tackler which should be enough to get him onto a 53-man roster this fall. It is also worth noting that Muse will turn 24 in early September, which makes him older than both of the Steelers current starting safeties (Minkah Fitzpatrick and Terrell Edmunds).

From Conway to the NFL, Bryan Edwards would be a Perfect Addition