The Best Thing Art Rooney II Said Was This 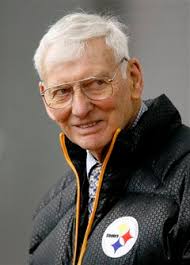 I’m getting right to the best story that came out of Art Rooney, Jr.’s season-ending press conference yesterday and I couldn’t be more excited about it. Rooney’s father Dan, who has relinquished his role as US Ambassador to Ireland, will have the ’emeritus’ removed from his title and will once again assume his role as ‘Chairman’ of the club.

While back in this role, Dan Rooney will more than likely be advising on league matters more than anything and while I’m still not happy with him that he pushed for Roger Goodell to be the commissioner, it is good to have him back. Along with League duties, he will also be “advising his son on running their team.” (standing ovation)

There is no other ownership group in the National Football League that I’d rather have than the Rooneys. You can have ‘Jerry World’ in Dallas and ‘Little Danny Snyder’ in Washington and all their money, because I love the way the Rooney family runs their organization. With that being said, that doesn’t mean I can’t be critical when it’s necessary and when it comes to Art II, there is criticism to be had.

Regardless of which side of the ‘Bruce Arians debate’ you were on, let’s be clear. Arians didn’t retire and he wasn’t forced out by Mike Tomlin. It was an Art II move and we all know this now. I’ll be honest, I thought we had grown stale with Arians. We struggled in the red zone and all too often failed to adjust when I thought we could, but I wasn’t exactly a ‘Todd Haley guy’ either. I wanted current quarterbacks’ coach Randy Fichtner and I know I wasn’t alone.

Be that as it is, Art II was doing something that his father and grandfather rarely if ever did and that was meddle. In his post-season thoughts a year ago, Rooney II said he wanted Ben Roethlisberger to “tweak” his game. He also made it crystal clear that the team needed to run the ball better too and that’s what led to the speculation about Haley. He was coming from a Kansas City team that had been atop the league in rushing during his couple of years there. It obvious he felt Haley would bring that to Pittsburgh. Haley’s offense was progressing prior to the Roethlisberger injury. He was being hit and sacked less and completing a lot of passes, but after that, things went south in a hurry.

It’s been an over-used cliche but Rooney II was essentially trying to turn the Ferrari into a dump truck. If 2012 was his version of a dump truck then I’d hate to see what his idea of a road grader is. No, Rooney II doesn’t block or call the plays or run the football or even fumble the football, but he is responsible ultimately for this team. Especially if he is going to ‘get involved.’

I suppose if Art II hasn’t learned about letting his ‘coaches coach’ from his father by now, I guess he probably never will, but is it ever too late to teach an old dog new tricks? I don’t think it is especially when the master is your father. I for one am glad to see The Chairman back. I hope he continues to show how you must let the men you put in charge do their job. Micro-managing has never worked at any level in football and it won’t in Pittsburgh either.

Why Would Haley Go to Arizona?

Steelers Don’t Lose Much With Release of Rainey

Did the Steelers Really Inquire About Jake...

Art is the future so I think he should remain the guy. Everybody stumbles when they are knew to a job that is as complex as owning a pro team. Having Dan comeback could be detrimental to Art’s development. This year had to be a huge learning experience for Art’s which will lead to good things in the future. This team is in transition with the champions of old retiring, it will take some good drafts and development to get back to playing championship football.

Thanks for reading truth… I really have no inside information one way or the other as to how involved Dan Rooney will be but I have to think he isn’t overly thrilled with what has transpired in recent years. You make a good point about ARII gaining experience and he still could, but I certianly hope he has learned some of the lessons already and now applies them properly.