I have no problem being proven wrong. The reason? Because usually that means what it is I was wrong about turns out to be a positive. I’ve already gone on record as saying that Mason Rudolph will be the backup quarterback when the season opens. Many believe that Dwayne Haskins is in line for it and because he’s played well in Camp, he deserves it. Practice and Training Camp are far different animals than actual gameplay is. Preseason or not, we will get “gameplay” on Thursday and it will provide all of us a glimpse of both guys. When Camp started, Haskins was in a battle for the third spot with Josh Dobbs. He’s performed well enough to be in the backup conversation. Will his solid play translate into game action? We shall see.

Rarely does a Pittsburgh Steelers’ Training Camp come and go without at least one “camp darling.” To be more specific, this is a player who catches the eye of nearly every fan, many pundits and even some coaches. But he doesn’t actually make the team. We’ve seen players like this in the past such as WR Justin Brown or OLB Howard Jones. They often don’t make the team for a variety of reasons. Their actual play in games is poor. They are pushed down the depth chart by better players or they just don’t offer enough position flexibility. Are there some guys working their way into this position in 2021? Well, yes there are. WR Rico Bussey has had a solid Camp as has OLB Jamir Jones. I guarantee however there will be more candidates over the next few weeks.

There’s a fine line in terms of these “camp fights” that have been breaking out. On one hand, you expect them but you don’t like them. On the other, you tolerate them but don’t want them translating into games. Right now, I’m not overly concerned with these skirmishes but if they are still happening once we’ve got some preseason games under our belt then I have issues… Zach Banner saw his first action in pads yesterday and was solid. The team was very cautious with his reps however… If Anthony McFarland can translate what he’s doing in practice to game days then the Steelers’ offense is in for a huge boost… Please, please, please remember this. Mike Tomlin is not concerned with winning or losing the Hall of Fame Game. His number one concern is health. A close number two is overall play. More specifically, do guys know what they are doing and are they doing it well. Set your pride aside win or lose on Thursday because the winning isn’t what it’s about… Rookie LB Buddy Johnson is making some waves. He’s shown no hesitation in hitting people and seems to be grasping the defense as well as can be expected right now. His ascension would be a huge asset for the defense… Terrell Edmunds is not taking reps due to offseason shoulder surgery according to Tomlin… We’re told that despite the struggles of rookie tackle Dan Moore the coaching staff is pleased with his effort and willingness to compete… According to Mark Kaboly of The Athletic Kendrick Green is going to get a lot of action Thursday night. He’s had his struggles with Tyson Alualu but never backs down. 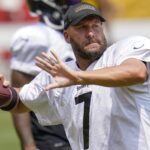