You’ll notice that yesterday I didn’t publish a version of ‘Quick Hitters’ and let me tell you why. Normally I get most of this written the evening before, make some additions or edits in the morning then publish. I had done the same thing in this case and then found myself constantly editing because of the situation in Tennessee. I literally made change after change from the night before and ever time I did it seemed the NFL moved the goal post on me. So here we are today and our Steelers will not play at all this weekend. With two more positive tests in the Titans organization, the NFL had no choice but to cancel. Now we enter the real problem. The Steelers will now treat this week as their BYE week meaning they will have to play 13 straight weeks. You aren’t crazy about this, I’m not crazy about this and many of the players aren’t crazy about it either. Why are the Steelers being punished for doing what they were supposed to do? I know that’s what many of you are thinking and I get it. But we all knew this was not going to be a normal season. We are in the midst of a pandemic after all. Yesterday was bizarre. It was odd and it was often surreal and blaming the Titans or the league is wasting your time. When asked about having to play 13 straight weeks Mike Tomlin said, “We do not care.” Did you really think he’d complain? It is what it is folks.

Tweet of the Day… Great new cover of Sports Illustrated!

Is Something Wrong With the Ravens?

Preface: Kansas City is going to do to a lot of teams what they did to Baltimore on Monday night. However, the Ravens’ offense didn’t look nearly as impressive as it did in weeks one and two. The Chiefs’ defense is “good” but I don’t view them as so good that they can shut down the Ravens the way they did. Baltimore is currently dead last in the NFL in passing and the offense is ranked in the low 20’s overall. This was never going to be a pass offense that ranked highly but more was certainly expected. Defensively, the Ravens look “OK” but they look vulnerable too.

We recorded episode 189 of SCB Steelers Podcast presented by DEK Roofing Inc last evening. Obviously the discussion began with the NFL’s decision to cancel the Steelers-Titans game this week. We talked about the ramifications of that plus discussed the Steelers win over Houston on Sunday. 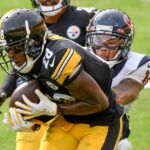