Nine games into the 2020 season, Ben Roethlisberger has been everything we hoped he would be while coming back from elbow surgery. While his overall return in general has been great, so too has his play. He’s completed nearly 67% of his passes for 22 touchdowns and just four interceptions. He’s easily the top candidate for the NFL’s Comeback Player of the Year. Unless of course you want to enter in the Alex Smith debate. Smith is the Washington QB who suffered a horrific leg injury that at times left him literally fighting to save the leg. By and large these awards don’t really mean all that much to me. The only award I want to see Big Ben given is the Lombardi Trophy but for sake of argument let us discuss. Smith’s return is nothing short of miraculous, no argument from me there, but he won’t see nearly as many snaps as Roethlisberger will if both remain healthy for the rest of the season. The level of success one has and hopefully will have is also difficult to compare. But in all reality, if Smith wins this award we should all applaud it. It will have been well earned for sure.

Tweet of the Day… I’ve had my issues with Coach T but this is pretty incredible.

Injury Thoughts… Minshew remained limited and that means today is big for him. I’m starting to think the Steelers will see a rookie QB for the second straight week… Mike Hilton and Isaiah Buggs were both ‘full-gos’ on Thursday and that bodes well for Sunday.

The Steelers entertained three free agent players this week. A kicker, a punter and a long snapper. It kind of sounds like the beginning of a joke… The kicker was Matthew Wright who battled Chris Boswell two seasons ago following Boswell’s unimpressive season. While it isn’t uncommon for teams to workout players throughout the season it’s definitely interesting to see these three positions.

SCB Steelers Quick Hitters: The “Not Having It” Edition 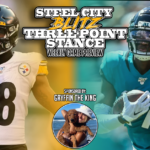