Roethlisberger Contract Situation Will Only Get Worse the Longer It Goes 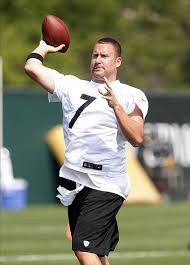 Pittsburgh Steelers’ Quarterback Ben Roethlisberger has never been shy about floating things out to the media. He’s gone from being a total novice about it to becoming a master of what to say and what not to say.

The two-time Super Bowl Champ floated his feelings on his current contract situation to the media on day one of Organized Team Activities. His stance remains clear in that he wants to finish his career in the Steel City where it started.

At 32, Big Ben is entering his 11th season. Not even he can tell you how many more shots at returning to the Super Bowl he will have but it remains his number one priority. Roethlisberger will be a free agent following the 2015 season and I firmly believe he needs a deal done prior to the beginning of that season but sooner would be much, much better.

The Steelers make it a policy of not negotiating contracts once a season starts and should he end the ’15 season without a deal he will most certainly get the message that he would no longer be wanted if he hadn’t by that point already. For their part, if the Steelers have already decided they’d like to part ways then they need to get working on a trade as soon as possible.

It will make absolutely no sense for the team to allow him to walk and get nothing for him in return. This is not what I nor many other fans want to see happen but we have to think logically here.

Is there any way the Steelers would pay Roethlisberger the money Jay Cutler or Joe Flacco is getting with him being 34 years old in 2015? I can’t see it happening and this is part of the dilemma.

Yesterday, Kansas City’s Alex Smith said he believes he deserves to be paid what Cutler is making which would be over $18 million per season.

By this logic, Roethlisberger should demand $25 million. And here is another piece to the problem… The longer the Steelers wait the more likely his price will go up. Injury could of course derail much of this discussion but we’ll cross that bridge should it come.

Ben Roethlisberger deserves to end his career in Pittsburgh and he more than deserves the money other top quarterbacks are getting. But I believe that if the Steelers act now rather than later they will be able to reach a deal that works for both because he just wants to win. He doesn’t care for or need the individual accolades. He wants titles and the longer this gets drawn out the worse it is going to be.

Roethlisberger Contract Situation Will Only Get Worse the Longer It Goes was last modified: June 2nd, 2014 by Steeldad
#steelersBen RoethlisbergerNFLPittsburgh Steelers

Contracts, No-Shows and…. Just Another Year at Steelers’ OTAs

Highly Unlikely, But Could Both Worilds and...

Who the Steelers WON’T Pick in NFL...

For Steelers’ Fans That Want the Quick...