If you needed something to get upset about then may I introduce Saints’ Defensive Lineman Cam Jordan. Jordan said yesterday that he doesn’t view Ben Roethlisberger as a “Hall of Famer” and said he believes Eli Manning is better. Jordan is absolutely entitled to his opinion as we all are. But sometimes facts are important when espousing opinions. For starters, Big Ben is currently sixth all-time in passing yards, 2,000 ahead of Manning.  He’s already passed Hall of Fame QBs Fran Tarkenton, John Elway and Warren Moon. He also ranks 7th in all-time TD passes, 11th in all-time passer rating (Eli ranks 42nd) and is 10th in yards per game. Toss in three Super Bowl appearances and the case is pretty clear. I don’t think Big Ben needed any more motivation than he already had for Sunday and I doubt Jordan’s comments will bother him.

There is growing concern about JuJu Smith-Schuster for Sunday. As of right now I think he’ll give it a go but he isn’t 100%… I’m ready to say James Conner is definitely not playing. He was sore after some light work on Wednesday… As I alluded to earlier this week the Saints’ offensive line is a mess.

Will I celebrate the fact that the Patriots have lost a playmaker in Josh Gordon? Yes. Will I celebrate what is happening to Gordon? No, not at all. Much like Martavis Bryant, what is going on with Gordon is very sad. These young men have to get themselves right before making football a priority again.

In a recent local newspaper “mailbag” a question was asked about why Kevin Colbert isn’t getting more heat for failed draft selections. The journalist said that he believes Colbert and Tomlin work together and that Tomlin usually has final say on selections. I can tell you that is not 100% accurate. While Tomlin will push exceptionally hard for players, Colbert has final say.

Have an excellent weekend Steeler Nation! 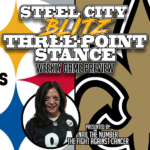 Drafting a QB is a Wasted Pick...