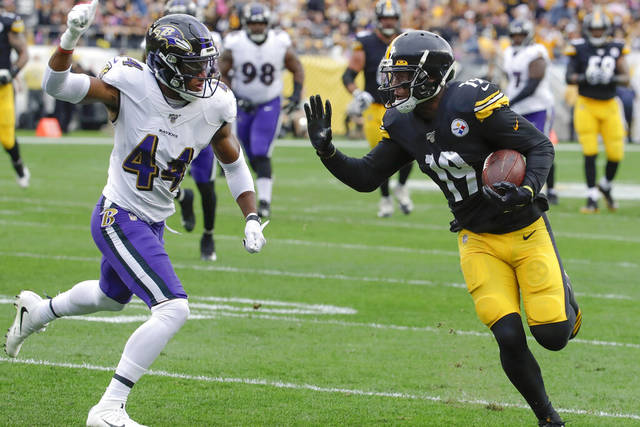 I’m of the opinion that the National Football League has done a pretty decent job with the Covid-19 Pandemic to this point. Many teams are now halfway through the season while others will be after next Sunday. To this point, the Tennessee Titans have been the biggest blip on that radar (which resulted in a paltry fine) but now enter the Baltimore Ravens and cornerback Marlon Humphrey.

Less than 24 hours after Humphrey played all 53 snaps on defense against the Pittsburgh Steelers, the Ravens announced that Humphrey’s most recent test was positive. This test was given on Sunday morning prior to the game. As you know, the Steelers won to move to 7-0 on the season but now they must hold their breath to make sure none of their players had it spread to them from Humphrey.

There’s not much the NFL can do if a player tests negative three or four straight days then comes up negative the morning after the game. But there’s a situation here that is somewhat unique for the Ravens. If you go back and look at the Practice Reports from this past week you’ll pay special attention to Wednesday.

It's somewhat notable that Marlon Humphrey was sick enough to skip practice on Wednesday. pic.twitter.com/8wkYyFzhYF

If a player was not feeling well enough to practice during the week, in a pandemic mind you, then shouldn’t that have sent up some red flags? Furthermore, why bother testing players on Sunday if you aren’t going to know the results until the day after the game?

My initial reaction in all of this was that the Ravens were complicit. They knew he was not 100% healthy and it’s unlikely he was much better on Thursday, Friday and Saturday but I can’t confirm that and now I’m not totally sure what should be done here.

As I stated, the NFL has done a pretty good job with this pandemic especially for not keeping players in a bubble but Humphrey’s case is going to bring about some new challenges. Can teams allow players to participate in games if they’ve missed practice due to illness? Will testing become more rapid especially on gameday?

We are currently seeing positive cases of Covid-19 skyrocket once again in most states which is only going to make it more difficult for teams and their players to remain safe. Do I think the Ravens and Humphrey bear some responsibility here? I do, but if they were following the guidelines the NFL has established then what more could they have done?

The answer to that question will likely have to be addressed now and let’s hope that it isn’t at the detriment of the Steelers.

One Week in the Books and Several...