The team made it official yesterday when they announced that Keith Butler would return for another year as the Defensive Coordinator. I’m not surprised by this to be entirely honest despite his struggles in recent playoff games. Butler is first and foremost an excellent outside linebackers coach and frankly I wish that’s where his focus was returning. That aside, I do recognize that he was playing with less than a full deck as the season wound down. No Devin Bush or Robert Spillane and no Bud Dupree or Joe Haden in the final two weeks. Regardless of your abilities as a coach when you lose players it’s going to have an effect. I do think we need some clarification on just who calls the defense because it was brought up at the end of the season that Mike Tomlin was doing it. Why is that important? Because it helps to know for we fans who to scream at! Actually, it just helps all of us understand how they do things on that side of the ball.

The Steel City Blitz Steelers Podcast presented by DEK Roofing Inc records later tonight. We’ll be joined by former Steelers’ Public Relations Man Ryan Scarpino who will give his insights on the Steelers’ dreaded finish and some thoughts on how the Steelers will operate this offseason. All that and much more! Grab a beverage and join us!

Are You Ready for Some O-Line Coaches?

The Steelers have been in discussions this week with Hank Fraley. He is currently the Offensive Line Coach for the Detroit Lions (who have a new coach and may not retain his services). He played his college ball at Robert Morris and signed on as a free agent with the Steelers in 2000. Most of his coaching career has been as an assistant but he was given accolades by the Lions’ folks I’ve spoken with because of how well he worked with a lot of injuries this past season. He’s also been given credit for the development of a few guys as well. I would really prefer more experience here to be honest but if he’s the guy we’ll give him a chance.

With Philip Rivers announcing his retirement yesterday, there has been a lot of talk about what would have happened had he come to the Steelers and Big Ben had gone to the Chargers. I get it, these things are always fun to discuss and I’ll add only this. Ben had to play behind some average O-Line’s early in his career and his mobility often saved him from more injury than he already had. Rivers had a very quick, Dan Marino-like release but I’m not sure that would have saved him. Let’s just say I’m glad things turned out the way they did. 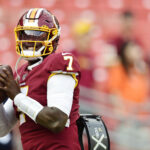 Steelers Follow Their Plan in Signing of Dwayne Haskins