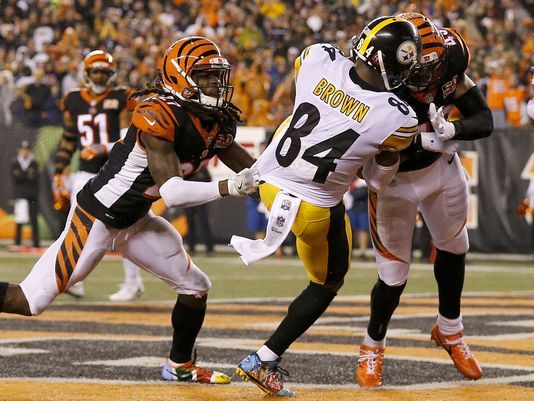 You could almost feel it coming couldn’t you? The National Football League after announcing a one game suspension (and upholding it the same day) of the Steelers’ JuJu Smith-Schuster,  has decided to lift the suspension of Cincinnati’s George Iloka. He will instead pay a $35,000 fine. You’ll have to forgive me here but just what in the hell is going on?

Iloka was given a 15 yard penalty on Monday night for his head-to-head shot on the Steelers’ Antonio Brown. Keep in mind that this was an “illegal” hit and was properly officiated by the zebras. Smith-Schuster however was penalized for what the NFL has deemed a “legal” hit on Vontaze Burfict.

Below was a message from the NFL”s Troy Vincent. Keep in mind also that Iloka is a multiple-time offender whereas Smith-Schuster is not.

Troy Vincent says taunting was NOT a factor in decision to suspend Smith-Schuster.
"It was the act of" the hit that drew penalty. Added he doesn't think league is sending mixed message by granting Iloka's appeal on suspension for helmet-to-helmet hit.

Much like Julio Jones was not suspended for his blind side hit of a Vikings’ player Sunday, I believe Iloka is getting a pass for the same reason. Both Brown and the Vikings’ player were able to get up and keep playing. Burfict did not get off the turf in good time and was eventually carted off. Therefore, the suspension for Smith-Schuster was upheld.

Here’s the problem. Players in the NFL get hurt on legal plays in every single game every single week. Why are those players who  injured them not being suspended? Is it because of the viciousness of the hit on Burfict? Was it because Smith-Schuster taunted Burfict? How do you suspend a player for a LEGAL hit but not suspend a player for an ILLEGAL one?

The National Football League thinks it is being destroyed by outside forces. Parents who won’t let their kids play football because of concussion issues… Donald Trump… Players protesting social injustices during the National Anthem…The hard truth is that the NFL is destroying itself.

Every time it tries to fix its’ discipline problem it just makes it worse.

I don’t care if the hit was legal, illegal, clean, or dirty….the simple fact is that JuJu gave Burfict a taste of his own medicine, medicine that he has needed for quite some time! Because of that, JuJu is now my favorite Steeler not named Bell or Brown! Hines 2.0!