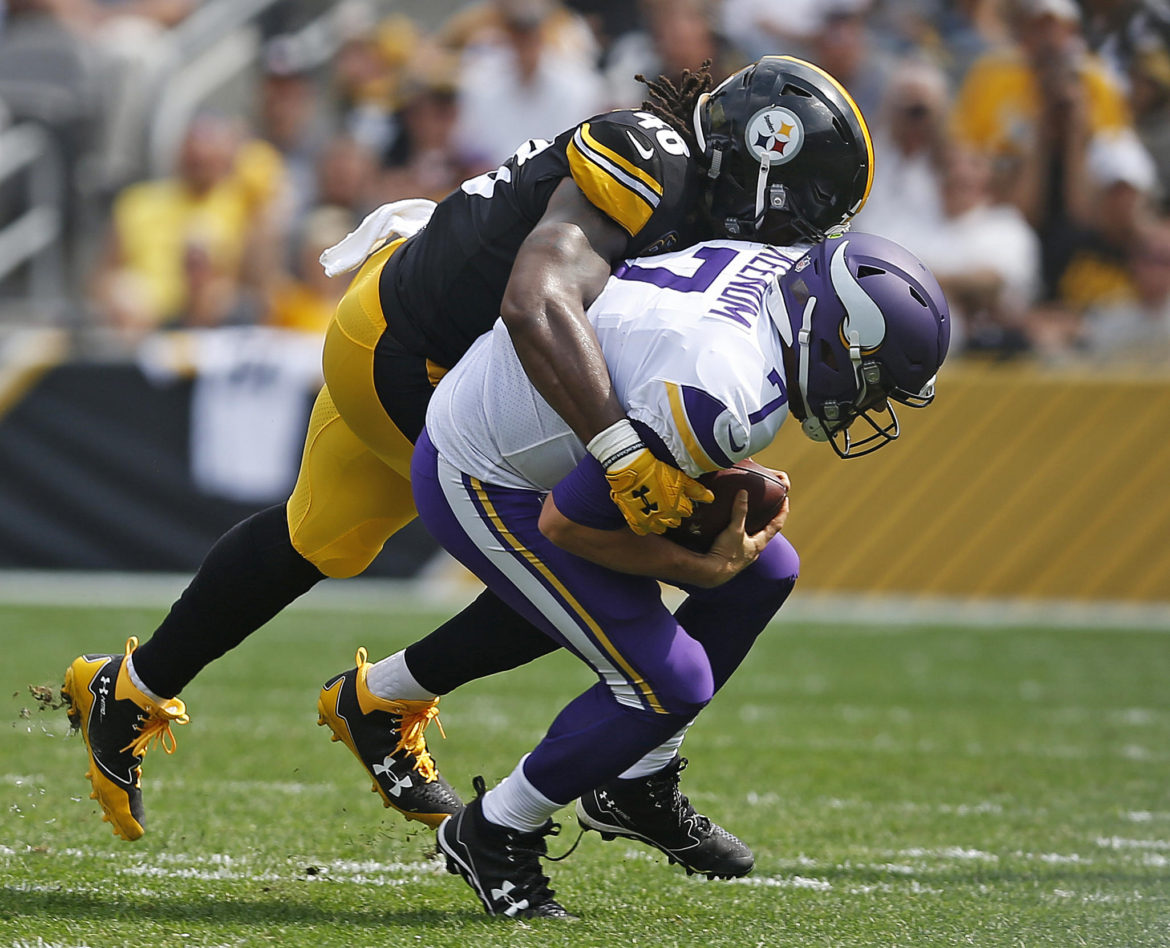 The Pittsburgh Steelers decided to pick up Bud Dupree’s fifth year option. After the 2018 season, the Steelers will need to decide on if they want to offer Dupree a long term deal or not. This should be minor déjà vu with Jarvis Jones, but the Steelers declined to offer Jones anything after a disappointing 2016 season where he started only nine games and recorded only one sack. Dupree recorded six sacks in 2017 and his sacks deserved to be analyzed and assessed so we can come to a conclusion on if his sacks were quality, gimme sacks, or pure luck. I did this for his 2016 season, which can be seen here.

Dupree times the snap well and has a quick get off. Right tackle Mike Remmers’ kickslide is short and slow. Dupree can easily get around him and jump on Case Keenum for the sack. This doesn’t display much or any talent from Dupree because he wins with speed and athleticism

Dupree reads the blocks and rolls over tight end Ben Watson to stunt in the B-gap. Unblocked, he sacks Joe Flacco easily. Again, this doesn’t display much or any talent from Dupree because he wins with speed and athleticism.

This sack is almost identical to the sack above against the Ravens. Dupree takes one step, rolls over top and shoots the B-gap right past the guard and unsuspecting center who can’t shuffle back in time to block Dupree.

Dupree shoots the B-gap and neither the guard nor tackle give any effort to block him. Both offensive lineman get one arm on Dupree and he is able to penetrate the backfield. Dupree misses the sack initially, then after other teammates apply pressure, he is able to bring Jacoby Brissett down.

Dupree gets pushed up the arc by right tackle Andre Smith and overruns Andy Dalton. Dalton then steps up in the pocket, waits too long and gifts Dupree an easy sack.

Dupree uses an inside stunt, finds the open space and closes the pocket on Tom Brady. The right tackle tried to reach block and it didn’t phase Dupree. Brady stays put and goes down.

How Dupree Can Improve

Dupree has no attack plan when he rushes the quarterback and this must change. In college, he won based off of his off-the-charts athleticism. Dupree cannot win in the win often without an attack plan coupled with some variety of pass rush moves. Having a variety of pass rush moves will keep offensive lineman on their toes and guessing on what is about to be thrown at them. If Dupree continues to have a scarce arsenal of pass rush moves, he will continue to not earn quality, or a high number of sacks. Developing these moves paired with his high athleticism would be a deadly combo for Dupree.

Dupree’s mental processing hasn’t improved much from his tenure at Kentucky. He frequently just guesses and doesn’t actually read what is developing in front of him. Success against offensive tackles is sometimes attained by knowing his weaknesses and exploiting them. If the tackle is weak against inside moves, perform them. If the tackle is weak with his kick-slide, run the arc.

Going back through all of Dupree’s sacks, are you impressed? Did he really put out quality sacks? In my opinion, no, he didn’t. His most impressive sack may have been against the Patriots, but even that sack, he was barely touched by either offensive lineman.

None of Dupree’s sacks were high quality, beating the right tackle with a pass rush move, or dominant reps. This is worrisome, as fans will see the six sack number and get excited. Four of the six sacks were from the inside, or B-gap. This isn’t a big problem, but you want your outside linebackers to be able to beat the tackle clean and get to the quarterback, instead of coming free or getting lucky with an unathletic quarterback.

For Dupree to achieve double digit sacks, he must develop pass rush moves to beat the tackle instead of just bull rushes or inside stunts against a guard. He will also need to stay healthy and on the field. Pairing this analysis with his 2016 assessment, I have yet to see a high quality sack from Dupree. To be convinced Dupree will achieve double digit sacks or earn high quality sacks going forward would be naive.

This isn’t an impressive bunch to say the least. Word is that in 2018, Dupree will be rushing from the left side. He will face tougher and more talented tackles, leaving me believe that Dupree won’t impress in 2018 and I doubt his long term future in Pittsburgh.

Be on the lookout for TJ Watt’s 2017 Sack Assessment, coming soon.. 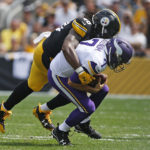 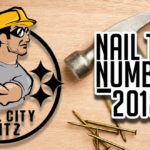 SCB and Nail the Number present the “Stock Market Challenge”