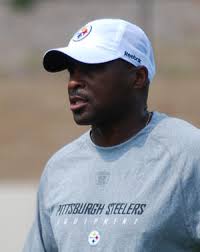 He is the only one among three other finalists without prior experience calling the plays.

The fact that Wilson doesn’t have that experience is no fault of his. It’s not secret, and Mark Kaboly of the Tribune-Review tweeted as much yesterday, that Wilson was going to be the Steelers’ offensive coordinator following the dismissal of Bruce Arians.

Prior to the Steelers’ playoff game in Denver in 2012 however, Wilson was badly burned during a house fire and needed significant recovery time. Thus began the Todd Haley era.

I for one will hate to see Wilson go. He is one of the more vocal coaches and is a treasure to watch during training camp each year in Latrobe. He is a high-energy guy who gives everything he has and expects the same from his backs.

Although I will be sad to see him leave if it comes to that, I will support his opportunity 100% and you really should too despite the fact he might be a ‘Raven.’

Fans today often believe coaches in the National Football League are supposed to be as loyal to their teams as they are but they forget that professional football is a business. If a coach has an opportunity to better himself, who are we to tell him no?

Should Wilson get the job, you can expect there to be some fallout among Steelers’ fans especially those who see Todd Haley as the second coming of the devil or Joe Walton. Take your pick. That comes with the territory and while I’m not exactly going to invite Haley for dinner, I’ve accepted he’s the OC whether I like it or not.

Kirby Wilson Deserves an OC Job Although It Might Not Be With the Steelers was last modified: January 22nd, 2014 by steeldad
Kirby WilsonNFLPittsburgh SteelersTodd Haley

Changing the PAT is Controversial, But It’s the Right Move

State of the Steelers: Safety

did you ever hear of the peter principle? this guy doesn;t have the brains to be a coordinator. i would be very surprised if he’s hired by baltimore.

That’s pretty close-minded J. Why do you say he doesn’t have the brains? If the Steelers were going to make him the OC that tells me he is smart enough to handle it.

“going” is the operative word here. they didn’t and i seriously doubt balt. will unless he has very close ties to gm.

I know he made the final two and will have a second interview so we’ll see I guess.

Hello – I just wanted say that this was a great post! Cheers!