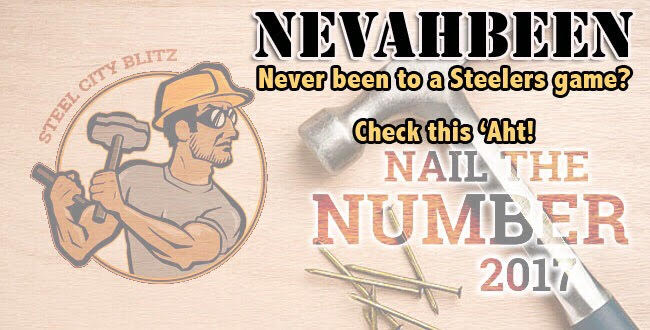 If I’ve learned anything in recent years it’s that running a contest is not easy. There are a lot of different factors that go into it and it can sometimes be more stressful than necessary. The one overwhelming positive though is when the winner is announced. Our “Nevahbeen” contest has been exactly as I described with the only exception being that it isn’t over just yet.

Our crack staff at Steel City Blitz has narrowed the field down to three finalists. This was not easy and there was much debate. The debate actually continues even after we finally decided. Regardless, none of this is possible without Mr. Wonderful whom many of you know as @NailtheNumber17. Please give him a shout on Twitter.

Our three finalists move on to the final phase. In no particular order here are the three lucky individuals.

Been teaching my daughter much like my Dad taught me! Had the towel signed by Timmons a couple years back. #1time pic.twitter.com/xWVHY75TRP

@NailtheNumber17 @SCBlitz been a fan for 26 yrs I live in TN. Being a single father I'm financially not able to go to a home game. #1time

@NailtheNumber17 Can I enter for my guy? He gave me his ticket to the 2009 AFCG! He deserves to experience Heinz Field. #1time

Each one of these had their own unique way of tugging at the heart strings of each of us and it was beyond tough because there were others that felt the same way. Congratulations to all three!

Each finalist will provide a video which will be no longer than 1 minute in length. This video will explain their love of the Steelers and why they should be selected the winner. All three videos will be posted here at steelcityblitz.com where all of Steeler Nation will be invited to vote.

All videos are due by Tuesday, November 7th at 9am Eastern. Videos not received in time will result in forfeiture from the contest. As a reminder, here’s what the winner will get:

-two tickets to the New Year’s Eve game at Heinz Field against the Browns.

-One night of lodging.

Best wishes to all three finalists and than you to everyone who participated.

Announcing Our Three Finalists for “Nevahbeen” and What Comes Next was last modified: November 1st, 2017 by steeldad
#Nevahbeen#steelersPittsburgh SteelersSteel City Blitz