When Pittsburgh Steelers’ cornerback Cam Sutton was drafted I wasn’t crazy about it. I watched a lot of his tape and I came away concerned about his ability to take on blockers on the outside and I was concerned about his tackling. During his first couple of seasons I haven’t seen much to change my opinion. Then Training Camp 2019 happened and suddenly Sutton is a vastly improved tackler and his cover skills have been very good as well. Now before we give him his Pro Bowl jersey we have to remember this is practice. I love the improvement and the willingness to get better so if this continues in the preseason? Then I think this change will have been a great one for Cam Sutton.

We discussed several times on the SCB Steelers Podcast about the possibility of rookie Devlin Hodges taking the third quarterback spot. While we admit, it’s a long shot, the chances of this happening are suddenly better than even we thought. Hodges has steadily improved each day and throws about as pretty of a ball as we’ve seen. He’s got good touch on his passes and seems to be getting more comfortable with the offense. If Josh Dobbs continues to struggle in the preseason and Hodges plays well? Then perhaps a change will occur.

I don’t trust anyone who eats their wings with a knife and fork….?

Don’t look now but Steelers’ rookie Benny Snell may actually be more than just a ‘ground and pound’ running back. Snell has shown very good receiving chops and also has displayed some burst that most of us didn’t realize he had. If this transitions to the game field then Snell will be tough to keep off the field. But… he will also give Randy Fichtner options on short yardage situations which is always a good thing.

Per Head Coach Mike Tomlin… Long Snapper Kam Canaday left with some tightness and was replaced in the long snapping game by Vance McDonald and Trevor Wood. Ryan Switzer and Donte Moncrief were both back at practice. Switzer is dealing with a thigh bruise and Moncrief has a dislocated finger… Status quo on T.J. Watt.

Tonight the Steelers will take school buses over to Latrobe Memorial Stadium for their annual practice under the lights. This is always a huge night for the Steelers and the fans. For the players, it’s a return to their roots being on a high school field and for the fans it’s a chance to see the players in a different environment and of course, get some autographs.

SCB Steelers Quick Hitters: The “We Have a Fight” Edition 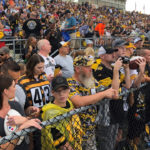