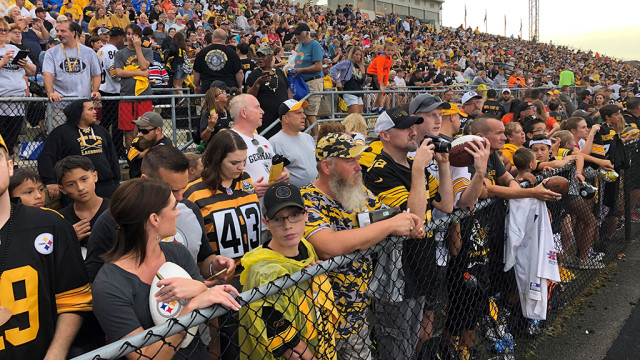 The Pittsburgh Steelers hopped on the big yellow school buses and headed over to Latrobe Memorial Stadium last night for their annual practice under the lights. Here’s some of the highlights from what we saw and heard.

Who Shined Under the Lights?

You probably haven’t heard much of Fred Johnson but he had a nice night for himself at guard battling well against the defensive line. Christopher Carter of DK on Pittsburgh Sports was very complimentary of his work too… Rookies Benny Snell and Devin Bush collided in ‘Backs on Backers’ and each found some success and failure in their battles… Mason Rudolph continues to separate himself from Josh Dobbs a bit. He was again more consistent and more accurate with his throws… Chuks Okorafor and Matt Feiler keep pushing each other and the Steelers are the beneficiaries… Ola Adeniyi keeps on trucking. Going to be hard to keep him off the field.

Joe Rutter of the Trib reports that Vince Williams (hammy), Anthony Chickillo (hammy) and Diontae Johnson (hip) were the major casualties from last night. None are currently thought to be serious.

Look, I know I’ve been beating this into oblivion but I’m not going to avoid it either. The Steelers have a major problem at tight end. Let’s set Vance McDonald aside for a second because he’s the starter. Period. End of report. Fifth round draft pick Zach Gentry is no guarantee to even make the roster right now based on everything we’ve seen and heard. Xavier Grimble will make the roster but we are much more comfortable with him being a number three due to his lack of consistent blocking. I feel very confident that the number two tight end isn’t on this roster yet.

Vince is Bringing It

You don’t have to be a rocket scientist to see what is going on at linebacker for the Steelers. Vince Williams isn’t a rocket scientist either but he clearly gets it. The Steelers want to get faster and are doing that with Devin Bush and Mark Barron. That doesn’t mean however that Williams is just going to go gently into that good night… VWill was a monster under the lights last evening. He sees what’s happening around him but he also knows there is a place for him on this defense. It still needs a thumper and it still needs a guy who can tackle consistently and he knows he has to be that guy. Hopefully his injury is not serious.

The Steelers will be back at it today at St. Vincent College in Latrobe.

Steelers Have a Battle Brewing for Punter

You are right about TE the only thing i can think of is that they are waiting for a late cut to fall in their lap. Because the last i remember McDonald was on a snap count. And with his injury history there’s a good chance we could be back to the Preston Gothard days really quick.