Good Thanksgiving Eve (is this even a thing?) Steelers’ Fans!

We need to have a conversation here. I need you to listen to me and you aren’t going to like what I have to say. Most of you probably won’t anyway… Athletes do not always think like you do when it comes to politics. You have to understand that many of them come from different backgrounds than you or I do and many of them are much younger than a lot of us now too. Even if an athlete comes from the same area or even went to the same high school or college as we did, that doesn’t mean anything in terms of how we all think. Not long after Devlin “Duck” Hodges was announced as the starting quarterback for Sunday articles started to appear about his support of President Trump. He tweeted this support a couple of times and then deleted them but not before they were screen-shotted and preserved forever. Many of you that read this column probably like Hodges even more now. And many of you of are now questioning whether you can support him or not. This has become America in the current environment. If you think Duck is the first player on your favorite team that has had different political views than you then I have some ocean front property in Nebraska to sell you. I’m a fan of the Pittsburgh Steelers as you are. I want my team to win and I’m willing to support the players as much as I can through thick and thin even despite the differences we may share. I didn’t care for the Rooney’s open support of Barack Obama and I didn’t care to see Donald Trump waving the Terrible Towel either. Neither of things ultimately matter though. I’m rooting for the Steelers not the politics.

We had a tremendous show last night and it’s here for your enjoyment. Ian, Ben and I looked at the decision to switch to Duck, what’s wrong with Mason Rudolph and what the Steelers need to do to beat Cleveland on Sunday. The Steel City Blitz Steelers Podcast 157 – It’s Duck Season presented by 26shirts.com/Pittsburgh.

Tweet of the Day… Be safe on the roads this weekend folks.

Call to the Hall

Alan Faneca, Hines Ward and Troy Polamalu were among 22 other players to be listed among the 25 semi-finalists for entry into the Pro Football Hall of Fame. I still find it a travesty that Faneca did not gain entry last year when fellow offensive lineman Kevin Mawae did. Despite being the more decorated player, Faneca was left on the outside looking in. This year I have no doubt that Polamalu will be a first ballot entrant. An investigation should be launched immediately should this not happen. As for Hines, he plays a position that is loaded with talent. I do think he will get in largely because of his style of play which was unique. I don’t know how soon this occurs though.

Cleveland is the most penalized team in the NFL and also leads the league in player ejections. The Steelers just simply cannot engage in that type of crap on Sunday. Their offense isn’t good enough to overcome 15 yard penalties and the defense can’t afford to give up yards. Easier said than done with emotions running high. 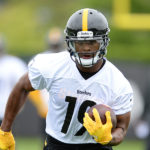 As far as hodge’s goes i’ll use a quote from Tombstone ” now i know i hate em”. As far as the HOF goes there is very little credibility left. Kurt Warner had 3 good seasons and he’s in. Donnie Shell should be in there isn’t one reason why not except the HOF doesn’t mean anything anymore. This game is going to be ugly on a few levels.