Good Tuesday to you Steelers Fans.

Days after the Steelers announced that Joey Porter would not return as Outside Linebackers Coach the team has also announced that Running Backs Coach James Saxon will not be back either. From a coaching standpoint the Porter decision was easy to understand. I can’t say the same for Saxon. Personally I felt that he did a very solid job with the backs. I would cite the success of both James Conner and Jaylen Samuels as proof. However, this move could be directed more at Mike Tomlin. Porter and Saxon were both known to be “close” to Tomlin and removing them could be more about setting a new, more professional tone. This is somewhat similar to when Bruce Arians was removed as the Offensive Coordinator in part because he’d gotten “too close” with Ben Roethlisberger. Perhaps Art Rooney II and Kevin Colbert need to see more professionalism and less ‘buddy-buddy’ stuff.

Speaking of ARII, when is he going to speak? He typically does a press conference the week after the team’s season ends.

Tweet of the Day… It’s that time of year again!

Let’s do this! Thanks to my friend @CamHeyward who needs a trim too. pic.twitter.com/Pv5JWe8xi3

Congrats to JuJu Smith-Schuster who has been named to the Pro Bowl. He will go in place of the “injured” Antonio Brown. The only thing injured on Brown is his ego. He’s already posted videos of himself working out and running on a treadmill. His absence has NOTHING to do with an injury.

According to ProFootballTalk.com, former Steelers’ OC Bruce Arians was asked to get a physical as part of his interview for the team’s head coaching position. Arians has never had an issue admitting he doesn’t work out much but I have to wonder if coaches like Mike McCarthy and Andy Reid have been subject to similar tests.

Hard to read the tea leaves coming from Cleveland right now about their head coaching position. They have plenty of options and I’m not really sure what direction they’re headed in to be honest. Same to be said for Cincinnati. Do they know they have an opening?

Both Porter and Saxon had contracts that had run out. Speculation is that because Keith Butler still has a year left on his contract he will survive at least for one more year. While I think he needs to go and I’ve said as much numerous times, let’s ask ourselves this; was the problem him or was the problem the lack of talent? This defense after all did finish sixth overall. Food for thought I guess. 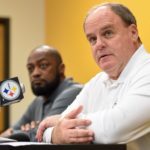