Reports started circling late yesterday that Le’Veon Bell has declared that he will arrive and report to the team on Saturday. Any thought that he will play should be immediately abandoned. There is no question in my mind that he is caving under pressure that started with harsh social media reactions and was capped off by criticism from his own teammates. To those suggesting that’s not it then why report now? If, as his agent claims, he’s trying to preserve his body in order to cash in next year, why show up? Does he think the Steelers will keep him on the bench until week 10? Not a chance. This is about saving face and about getting paid.

Below is an interview and then a take from Jim Rome on the subject. Then I’m moving on to the game.

Personally, I don’t think they’ll regret anything. Especially if it means getting Bell to show up sooner which I think is happening.

Browns’ Coach Hue Jackson claims Josh Gordon isn’t playing this week. If he doesn’t then I’ll be the one to jump in Lake Erie.

Tweet of the Day… This is pretty freaking awesome.

I really think we all need to take a breath when it comes to James Conner. This kid has yet to start an NFL game yet many are thinking he’ll run for over 100 yards, score a bunch of TDs, etc. Cleveland’s run defense has been decent but we have to also recognize the pressure being placed on Conner as well. Give him a game or two before we get too crazy.

Speaking of crazy… If you’re comparing your own “labor vs management” issues to the Bell-Steelers situation then stop. Every situation is different whether it’s police unions and the city, teachers unions and the administration or pro athletes and the owners. They are each unique and require a lot of understanding before commenting on them. Bell was offered two contracts that would have made him the highest-paid running back in the league. He wanted more and the Steelers weren’t willing to go there. Simple right? As in any negotiation, there’s a lot more to it than that.

Don’t be surprised to see Ryan Switzer worked into the offense a bit for this week. I think a target or two is possible due to his quickness from the slot.

Make sure you check out Ian’s latest on WPIAL action for Week 2!!

Here’s my official prediction (and why) for the Steelers in 2018.

And don’t miss our official SCB picks for the 2018 NFL Season! 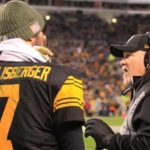 What I’m Predicting for the Steelers in 2018 and Why

5 Tasks to Complete After Drafting Your Fantasy Football Team