It’s been speculated that rookies JuJu Smith-Schuster and Cam Sutton will return to practice this week. For JJSS, he suffered a bone bruise during the last week of Training Camp on a play where it looked much more serious. After not playing in Sunday’s win over Atlanta, he’ll want to get back on the field as soon as he can. The case of Sutton is more pressing in my opinion. He’s participated very little so far since the Steelers started practice in late July. He’s been dealing with a hamstring injury that has limited him. He’s hoping to play on Saturday against the Colts and quite frankly, he needs to play.

T.J. Watt coming back to Earth a bit Sunday was actually a good thing in my opinion. After two sacks in his first game, he went without one on Sunday but that’s OK. The fan base needs a dose of reality. This kid is not going to produce that kind of success every week. To think otherwise isn’t fair to Watt.

Tweet of the Day #1: I think Aditi makes a very good point here. I do not understand why the Steelers did not address the boundary corner opposite Artie Burns in the offseason. Sutton may ultimately be the guy to replace Ross Cockrell but it may not be soon enough.

And as we watch the heady veteran CB Jason McCourty make that tough strip, reminder to Steelers fans: Pittsburgh didn't even call him.

The debate over whether four preseason games is too many is already rearing itself again. This time in reaction to Odell Beckham Jr.s’ scary looking injury last night. The NFLPA will no doubt require larger rosters and fewer preseason games if the NFL moves to an 18-game schedule as many believe they will. With so many guys sitting for two and three preseason games already why not reduce the number of games?

Speaking of Beckham, Jr… The hit last night has also brought back the discussion of “I’d rather get hit in the head then in the knee.” Players might miss a week with a concussion but a whole season with an ACL or similar injury. At the end of the day, defensive players already have enough of a small area with which to tackle don’t they? We may as well get the belt s and flags ready.

We should see Landry Jones practicing more this week and if he plays against Indy this week get ready… The Jones vs. Dobbs stuff will be coming fast and furious. 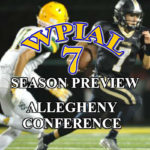 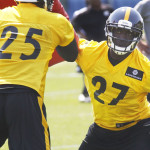 The Days are Numbered for the Steelers’ Golson