In case you missed the major news (no I’m not talking about rookie jersey numbers) the Pittsburgh Steelers will don their color rush uniforms for the second straight season. In the week 11 match-up against the Tennessee Titans, the black and gold are expected to bring back the massively popular unis. To be honest, I’m fine with these jerseys and pants. I like them much better than I do the “bumblebee” throwbacks I can darn sure tell you that. (photo courtesy steelers.com)

The Steel City Blitz Podcast presented by 26shirts.com/Pittsburgh is on live tonight at 10pm Eastern. We’ll be discussing the State of the Secondary, rookie mini-camp and much more. Tune in!

Speaking of rookie mini-camp, that starts tomorrow. We are looking forward to the massive amount of superlatives that will be used to describe each rookie…

Big congratulations out to the Penguins for their 2-0 win over the Capitals in game 7. On to the Conference Finals where the Ottawa Senators await.

Tweet of the Day… Da Beard chimes in on Da Hockey.

In our excitement to get out those rookie jersey numbers, we may have completely overlooked the numbers assigned to some of the other new guys in black and gold this season. Here they are! Justin Hunter – 11, Coty Sensabaugh – 24, Tyson Alualu – 94 and Knile Davis – 34. Ya I know… Going to be weird seeing ’94’ on someone other than Lawrence Timmons.

Yet another reason to love Cam Heyward. (Courtesy steelers.com)

The Steelers officially signed seventh-round draft pick Keion Adams of Western Michigan yesterday. It’s going to be an uphill battle for Adams to make the roster but his effort will not be a problem. Very high motor for this guy!

Interested in a bottle of wine from former Steeler and Super Bowl MVP Hines Ward? Check it out here. (courtesy post-gazette.com) 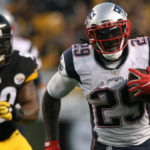