Not Everyone Accepts Terry Bradshaw and I ‘Get’ That 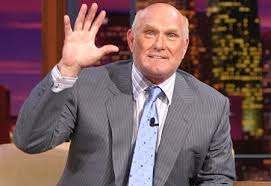 The older I’ve gotten, the more I’ve tried my best not to judge others. It isn’t always easy but then there are the Justin Bieber’s of the world who make it very, very simple. The point is, I try not to judge the book by the cover. I will however judge once I’ve done some reading of ‘said book’ and whether right or wrong is my choice an no one else’s.

The recent passing of Pittsburgh Seeler legend Chuck Noll has brought back a lot of memories for a lot of people. It was only inevitable that at some point the name of the quarterback who helped Noll’s teams to four Super Bowl titles would come up.

Not unexpectedly, the name Terry Bradshaw was not used in the most positive of lights. Despite being in town, Bradshaw did not attend funeral services for his former coach and that brought on a lot of jeers in Brad’s direction. If you know anything about the history of the Steelers then you know that Noll and Bradshaw didn’t exactly have a warm and cozy relationship.

Read Gary Pomerantz’s “Their Life’s Work” if you want a very good view into the relationship.

Bradshaw caught hell in 1988 when he didn’t attend the funeral of the Chief either. When Art Rooney, Sr. passed away, Bradshaw’s absence was glaring. Due in large part to his rocky relationship with Noll, Bradshaw didn’t attend and has since admitted that it was a ‘horrible mistake.’

About 10 years ago, Bradshaw seemed to make peace a bit with Noll as they attended a couple of events in Pittsburgh together but any chance the relationship was going to blossom went out the window once they went their separate ways.

I could easily join the chorus of those calling Bradshaw out for not attending Noll’s or Rooney’s funeral but I won’t and the reason is simple. I don’t know Terry Bradshaw. I have never met him and for me to judge him and his decisions would be wrong. Another reason I will not take him to task is that I ‘get’ him.

Bradshaw revealed in recent years that he has battled depression, was diagnosed with adult ADD and dealt with anxiety as well. I’m not using those things as excuses for him missing those and many other events but I understand what he was feeling. Some of us who deal with anxiety issues and yes I am one, deal with things differently than ‘normal’ folks do.

Somehow, someway Bradshaw has the ability to turn things on (such as when he goes before the TV cameras) and the ability to shut things down. This happens when his comfort level is poor and uncontrollable. The anxiety rises and the ability to put one’s self into a difficult social situation becomes almost impossible.

I can’t speak entirely for Bradshaw but I can see what is going on and I think anyone who has dealt with depression, attention issues and anxiety could tell you the same.

Brad has always been my favorite Steeler and a lot of that is because he isn’t perfect. He’s far, far from it and he is who he is. I don’t agree with everything he says and does but I ‘get’ him and for me that’s all that matters.

Ike Taylor Goes Off About His Pay Cut

SCB Steelers Quick Hitters: The “Cart Before the...

How have the Steelers fared in Roethlisberger’s 2nd...

IMO he shoulda @ least gone to viewing If only for 10 min’s paid his respects but I understand why he didn’t & I’m not gonna crucify him for not going. C’mon people grow up.

I certainly can’t argue with that Mario.

Everyone has issues and troubles. Attending a service in my opinion is a matter of respect, not only for the deceased but for the family, and others close to the person. If you can right yourself in front of an audience, you can do the same at a service, even if for a short period of time.

I agree that everything should be done to attend some form of the funeral proceedings and he failed in that respect. I do think Bradshaw is troubled more than the average person but I’m not a doctor. Just going based on what I’ve learned and observed.

He should be tarred and feathered, first chance.