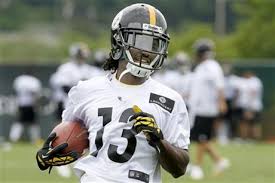 Normally when I read an article from Dejan Kovacevic of the Pittsburgh Tribune-Review, I come away very informed, entertained and usually feeling positive. After reading his latest piece on the Steelers, I can say two of those things were accomplished this time. The one that wasn’t? I’m not feeling real positive about the Steelers’ offense right now.

No, no, no…. This is the exact same thinking Todd Haley had with Chris Rainey. If the Steelers want to put Archer in the backfield then that’s fine but this expectation of running between the tackles is ludicrous. Rainey was terribly misused and if Haley is going to do the same thing with Archer then why did they bother drafting him?

He is not a ‘between the tackles’ guy anymore than Rainey was.

Kovecevic also discussed the wide receiver situation which doesn’t leave me any more positive than what the Steelers may do with Archer. When Lance Moore signed in free agency, most of us had the impression he would be perfect in the slot. While he has experience as the number two receiver, I see him as being far more equipped to be the third wideout.

If Moore is to be in the slot, then who is going to be the number two? I’m tired of hearing fans talk about Martavis Bryant being that guy. He’s too raw and from everything I’ve seen and read he is not ready to assume that position.

Markus Wheaton was thought to be the guy ready to take the number two spot but he has more problems with his fingers than an arthritic senior citizen. Can he get himself right by the time training camp arrives?

I’ve seen a lot of good comments about Justin Brown who spent last season on the practice squad but is he truly ready? What about Darrius Heyward-Bey and his drops? Is Derek Moye still an option?

Does this offense have potential? Of course it does but it has far more questions than answers right now and I didn’t even mention the offensive line or Heath Miller.

Fans are going to tell me to be patient and I get that. I’ve preached that myself before. This isn’t about patience though, it’s about common sense.

Improvement in the Steelers’ Kicking Game Can Benefit the Younger Defense

Not Everyone Accepts Terry Bradshaw and I ‘Get’ That

Dissecting Dennard and Fuller as the Steelers’...

If it makes you feel any better it sounds like Ben will be calling much more of the shots in 2014, as he typically does in the no huddle. That’s when the offense has usually been at it’s best.

He said Archer will run between the tackles, but I put very little stock into quotes. Let’s wait till preseason so we can actually see what they do.

I hope you’re right Chris. I agree that there will be times where he’ll need to pick up the blitz but the ‘tackles’ comment gave me nightmares.

Steeldad just calm down man it’s only minicamp. The Steelers are not going to reveal anything more than what is said. You may not like Archer running between the tackles but look at like this: You have Bell and Blount who well get about 90% of the snaps at RB and Archer is someone that only needs to go in between the tackles when Ben and Haley feel its right. More often than not your going to see Archer in the return game and on the outside catching the ball or out of the backfield. So as far as in between tackle stuff don’t bother with it unless it’s something that everyone feels uncomfortable with. Think about the comment Ben used, did anybody out side of Dejan complain about it in the media? Unless a big deal was made by the fans or the media then what’s is there to discuss?

I realize it’s early, but what evidence do we have to suggest that Haley won’t misuse another speed guy? That, in essence is my point.

That is for Ben to decide on what needs to be done with him. Look to start of the season he will return most kicks and punts not all but a fair amount. Look at McCluster and how he was used when Haley was the coach. It’s all about timing and finding what packages fit what he can do. Make the Defense to focus there attention on Bell and Blount as much as possible and only use Archer on some short yardage plays at least 25% of the time. Besides until the pre and regular season starts we can only guess what the Steelers can do. Can you at least wait until the preseason is over and then you make your call on Archer?

If Archer is used right he will be fine. This isn’t as much about him as it is Haley. If he uses Archer in short yardage 25% of the time then he better be running pass routes.