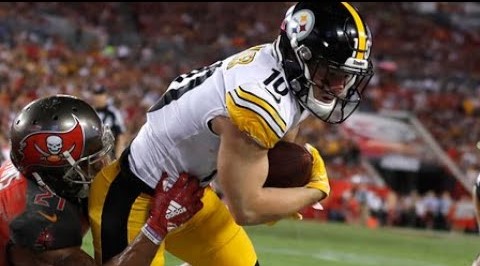 Last week, I discussed how the Steelers bungled time management during their final drive of the game against Kansas City. This week, they came out and executed a master class two minute drive to put seven more points on the board right before halftime. As the game would have it, this wound up being the game-winning score. The Steelers defense came up with a red zone stop, giving the offense the ball back with 1:15 on the clock and all three timeouts.

The first play was a relatively simple isolation to get some easy yards and start the clock rolling. With trips to the right, Ben had AB and James Washington both in the slot.

Washington ran a skinny post that pulled the slot corner deeper while AB ran a simple under route and was wide open for an easy 6 yards.

On the second play, Tampa got a bit of a push with their front four and hand good coverage on everyone except James Conner leaking out of the backfield. Ben checked it down to Conner and Vance McDonald got a key block in the middle of the field.

The Steelers used their first timeout with 43 seconds left. After getting burned twice in Cover-2 zone defense, Tampa came out in a Cover-1 Man Under defense. Ben easily identified this by having JuJu run in a short motion pre-snap and saw the defensive back shadowing him. This meant AB had single-coverage on the right side.

Brent Grimes was giving AB an 8-yard cushion at the snap and when AB came out running straight, Grimes bailed in an attempt to get a head start on covering a fly route. AB slammed on the brakes and cut to the sideline, hauling in another brilliant “Tony Toe Tap” catch on the sideline before Grimes could close the gap.

On 2nd and 1, Tampa stays with the Cover-1 Man look, but this time Grimes is not giving AB a free release at the top. Tampa’s defense is stacked towards Ben’s right, despite the Steelers having three receivers to the left. With Jason Pierre-Paul lined up in a “Wide 9” track stance to rush the passer, this left 3 defensive backs on that side of the field to cover 3 receivers.

This play is made by Vance McDonald running a seam route, holding the safety in the middle of the field. Out of the slot, JuJu starts like he is running a shallow cross then makes a quick cut back to the outside to get position on the defensive back. Ben throws the ball to the outside and JuJu is able to make the catch with a lot of green grass in front of him, thanks to James Washington’s fly route clearing out the boundary defender. JuJu is able to out-run MJ Stewart to the sideline for a 12-yard gain.

First down, clock stopped, into field goal range. The Steelers stayed in the “trips” look on the next play, but this time had Vance McDonald split out alone to the left. Washington and JuJu shared the slot to the right with AB split wide. Washington and JuJu are running a “levels” concept.

The Bucs actually covered this play well, but Ben was able to sling one to Washington across the middle and he went up and made a great individual effort to haul in a leaping grab with the ball slightly behind him. It is worth noting that this play does not happen without James Conner’s blocking. Tampa came with a blitz from MJ Stewart, the slot corner. Kwon Alexander (#58) blitzed first from the linebacker spot, running a stunt with DT Gerald McCoy, and was picked up by BJ Finney.

This gave Stewart an open lane to get to Ben, but Conner was able to get across and seal the block to give Ben the time needed to make this throw.

After the Steelers second timeout, Tampa sets up to bring pressure from Ben’s left. Ben quickly identifies James Conner coming out of the backfield as the hot route and throws right past the blitz to Conner. Bucs LB Lavonte David was in the middle of the field and tasked to cover Conner.

David has far too much ground to cover to even get close to Conner before the catch, and James is able to haul it in and beat David to the sideline for a short gain that also stops the clock with 24 seconds left.

On 2nd down, the Steelers once again use their trips set to take advantage of the Bucs offset defense. Tampa lines up with 7 defenders to the bottom half of the field. The Steelers respond with three receivers in a bunch on the high side against Tampa’s 4 defenders (one of which is Jason Pierre-Paul). This leaves just one defensive back (MJ Stewart) within 7 yards of the bunch set.

Off the snap, Vance McDonald gets a chip on JPP then runs a seam route, which draws the attention of both deep defenders. James Washington is running a shallow cross but also gets a bit of a pick on Stewart, who was supposed to be in man coverage on JuJu.

This allows JuJu to not only get a free release to the flat, but to catch the ball with no defenders in the same zip code. JuJu takes it down to the 2 and gets out of bounds.

The Steelers now had first and goal at the 2 with 17 seconds and 1 timeout left. In theory, this meant the Steelers could have run the ball, but they wanted to keep the field spread and let their receivers continue to win one-on-one battles. Tampa’s defensive backs made two plays to knock balls away. On first down, MJ Stewart got revenge for being victimized the entire drive and knocked a ball out of JuJu’s hands. On second down, Ben tried to hit AB on a slant and rookie Carlton Davis got flagged for pass interference, setting up 1st and goal at the 1 with 10 seconds left.

The Steelers made a substitution to bring in Ryan Switzer in place of James Conner. Pre-snap, Switzer motioned out of the backfield and a defender came with him, signifying man coverage. Since Switzer was lined up in the backfield initially, this defender that trails him was safety Justin Evans, not a cornerback.

AB is running a back corner route and Switzer is running a short out with both receivers going towards the boundary. As he releases from the line, AB gets through the jam from CB Carlton Davis and gets just enough of Evans to allow Switzer to gain outside position and for Ben to fit the ball in against the sideline.

Despite the horrendous camera angle ESPN used to show us this play, Ben made a great throw to the outside and put the ball in a spot where either his receiver or no one was going to be able to make the play.

After the horrendous, time-consuming drive that the Steelers put together last week against the Chiefs, this was a masterclass schooling by Ben. Everyone on the offense contributed on this drive, from Vance McDonald making a big block and running clear-out routes to Antonio Brown drawing coverage, to James Conner and JuJu piling up yards after the catch and getting out of bounds to preserve time on the clock. The offensive line gave Ben time and plays were called that took advantage of the man coverage concepts Tampa was trying to play.  Ultimately, Ben hit 5 different receivers as the Steelers moved the ball 75 yards in 10 plays in just 1:09. This touchdown put the Steelers at the 30-point mark at halftime and wound up being the game-winning score.