There’s an old saying about quarterbacks in football. If you have two who play then you really don’t have a quarterback. The same can easily be applied to the cornerback situation for the Pittsburgh Steelers. As long as Joe Haden is healthy, he’s got that side locked down. The other side however is a mess. Mike Tomlin said yesterday that Artie Burns, Cam Sutton and Coty Sensabaugh will continue to rotate until someone steps up. I’m not really a fan of this because I believe corners need snaps to find rhythm but I also see Tomlin’s point too. All three have proven they have serious deficiencies that need to be worked through. The rotation will continue for the foreseeable future so buckle up.

Former Steeler James Harrison continues to “endear” himself to Steelers’ fans. He suggested that Bell report week 10 then fake an injury. I’ll take it one better. How about Bell reports week 10 and the Steelers never play him. I’d love to see that.

And by the way, Chris Conte who was on the unfortunate end of Vance McDonald’s stiff-arm, is out for the season with a knee injury suffered on the play. Insult to injury or maybe it’s the other way around in this case.

Bleacher Report claims that Adrian Peterson stated that the Steelers contacted him last year about singing with them. I’m not saying this didn’t happen but that would have been a really odd signing. Peterson’s prowess as a runner is well-known but he isn’t much of a receiver out of the backfield. I just don’t see the fit.

Ben Roethlisberger didn’t elaborate but did apologize to Antonio Brown when he began his postgame remarks Monday night. He was referring to the incomplete pass late in the game where he and AB appeared to be on different pages. Big Ben reacted with about as much emotion as you’ll see from him in that situation as he slammed his helmet down. This is much ado about nothing but I think a lot of people noticed Ben’s reaction and it raised a few eyebrows.

The Steelers have quite a streak going on Sunday Night Football and with the Ravens coming to Heinz Field it’s a perfect time to continue that! 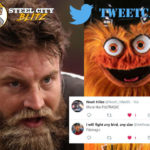 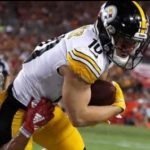