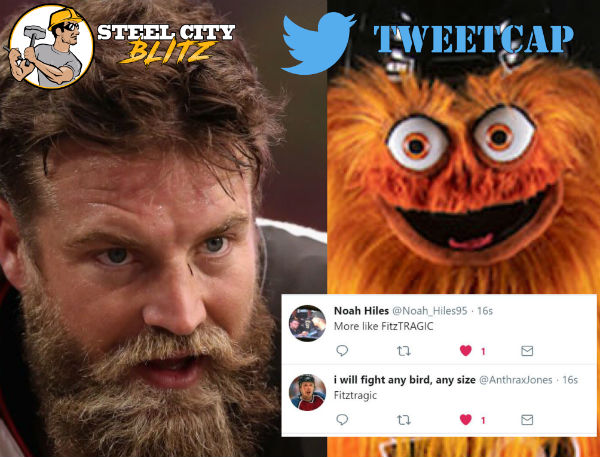 The Steelers took a 0-1-1 record into Tampa Bay, trying to recover from a brutal loss to Kansas City where Patrick Mahomes lit them up. Now, they got to face the league’s leading passer Ryan Fitzpatrick. A decade ago, the Steelers came to Tampa and something happened.

Where have we seen this before? ? pic.twitter.com/H9PguwXx6I

When the Steelers are on the road, they’re really at home.

I think this is something everyone could get behind.

TB needs to bring back the classic Creamsicle unis

And just like at home, it was more of the same to start.

Pick. Darn…… Feels like a Monday at the moment… #steelers

-5 IN TURNOVERS NOW…WORST RATIO IN NFL

Man Road Ben shows up at the wrong times.

Being a steeler fan this year is like being a parent of a teenager, you love them so much but want to wring their fucking necks at the same time

I spent the afternoon writing about how Pitt needs to be better in the field position battle.

The Steelers may also want to consider not giving opposing teams short fields.

The Steelers are bad. I've made my peace with it.

Then out of nowhere, Bob Vance, Vance Refridgeration came through with the Stiff Arm Heard Round The World.

VANCE MCDONALD SENT THAT MAN TO THE BOTTOM DEPTHS OF HELL

That Bucs DB has to retire. Sorry.

Get outta my way punk

“Why don’t I get respect”-Conte

Me to everyone saying "the Steelers are in trouble this year". https://t.co/LFQDjkqei1

oh mama he’s in fear for his life from the long arm of Vance McDonald pic.twitter.com/ce7MF2jguF

Before you could celebrate too much, Boz missed another extra point.

Tampa drove right back down the field, but Anthony Chickillo came up with a big play on third down to not only get the Steelers off the field, but force a punt.

Quality sack by Chickillo that took them out of field goal range!

On 3rd and 8, @Chickillo56 comes up with the SACK! Tampa Bay is taken out of FG range! #HereWGo

The offense came back strong.

Can we blame Narduzzi for Jordan Whitehead blowing coverage on JuJu there?

So remember all those people joking that Chris Conte had to retire after the Vance stiff arm?

#Bucs S Chris Conte hurt his knee and he is OUT for the rest of the game. (He's the guy Vance McDonald Heismanned.)

(UPDATE: Conte was put on IR On Tuesday morning and is out for the rest of the season.)

Pete Morelli is one of the worst officials in the league.

Then it was the defense’s turn.

Time for the D to get a turnover

the Steelers again get a turnover because players CAN’T TACKLE

DO YOUR THING ANTONIO BROWN

Obviously that is a splash play by the AB of the offense. Obviously he uses his personal days well. We embrace that he won’t work tomorrow.

Is this real life? #Steelers

Artie Burns forces a turnover and the #Steelers capitalize right away with an Antonio Brown TD. #Steelers up 16-7 now.

The defense kept up the pressure and forced another turnover.

Mike Hilton now with a fumble recovery and an INT. Tipped by Bostic, who has made a couple of really nice plays tonight. #Steelers

Even when the offense couldn’t do much, the defense still could.

Still September, but think I see a pumpkin, or just a Harvard QB that's the same as he's always been.

Another interception, this time by the rookie!!! This secondary is stepping up today! #HereWeGo

Ladies and gentlemen, we now return you to your regularly scheduled Ryan Fitzpatrick.

Bud Dupree did a thing

#Steelers LB Bud Dupree (@Bud_Dupree) registered a pick-six off of Tampa Bay QB Ryan Fitzpatrick in the second quarter – the first interception of his NFL career.

This roughing the passer penalty is ruining games.

Roughing the Passer calls are absolutely out of control.

Fun times in the first half.

On the way home from work, good to see the Steelers are dogshitting on the Buccaneers.

Just happy Ryan Fitzpatrick has another job lined up… pic.twitter.com/lIkydEHAVF

The Steelers got the ball back with a minute and a half left and all three time outs and didn’t screw up the clock management, engineering a beautiful drive down the field that resulted in a touchdown.

What a drive. Wow.

(Also, wtf on that camera angle)

Steelers are driving… and… managing the clock? pic.twitter.com/XNiIrjFgZq

Great clock management on this drive

There were no roughing the passer penalties called during halftime

Tampa got the ball first and on a weird play, completed a pass over the middle and the receiver got up and ran to the end zone and it was called a touchdown?

If this stands, it's the defensive version of Plex spiking the live football

This is what happens when everyone is afraid to tackle.

The NFL has some really dumb rules.

Can’t blame the Steelers for assuming that tackling someone would be a penalty.

Don’t worry, ESPN hired Jeff Triplette, one of the worst officials in the history of the league, as their “”rules expert”” to explain this to us.

Why the hell would anyone hire Jeff Triplette as an expert? #ESPN #MNF

After review, the runner was down by contact. Bullet, dodged.

Dupree and Heyward with sack but Fitzpatrick held on to it a long time. Good coverage by DBs

bud dupree actually getting a sack is a sign of the apocalypse. check your doomsday shelter

Three sacks in the opening drive of the second half for the #Steelers defense as they hold the Bucs to another FG. 30-13 with 7:07 left in the 3rd QTR.

Boswell needs a visit to a good sports psychologist

Things started to slip away…

Joe Tessitore always acts so excited when everyone watching knows the play isn’t going to stand. That’s 2 “TD” by the Bucs he’s went nuts on that were called back.

NFL, where literally every exciting play gets wiped out by a flag

This game is a roller coaster of emotions.

I know the narrative is how terrible the defense is but. The offense literally has scored ZERO points this half

The Bucs got the ball with 5 minutes left to play down by just 3.

Two dropped INTs on consecutive plays. That type of stuff comes back to haunt you

I just went to the fridge to grab a beer and got called for roughing the passer.

Thankfully, the Steelers were able to hold and get the ball back. Ben hit JuJu with a beautiful throw across his body.

espn: “all year long”
uh, you mean all two weeks so far?

Vintage Ben!! JuJu has just been having a crazy great year! #HereWeGo

Juju is such a beast

There’s great and there’s whatever Big Ben has been tonight. Literally just back packed this team to a W.

What a play by Big Ben Roethlisberger. On the HOF highlight reel. Classic Big Ben

People think “arm talent” refers to just strength. Ben’s pass awhile ago across his body as he eluded rushers was arm talent.

Then James Conner iced it with two big runs.

LEARN IT. RESPECT IT. REPEAT IT.

Yes that is James Conner putting the game away! #eriepride

“As Conner breaks free to put this game away!”. I like the sound of that!

I’ll take the win, obviously. But this defense is… a problem.

OK #Steelers needed that win and they got it. 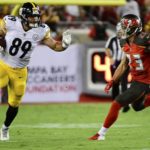 McDonald Flashes Much of What Brought Him Here to Pittsburgh