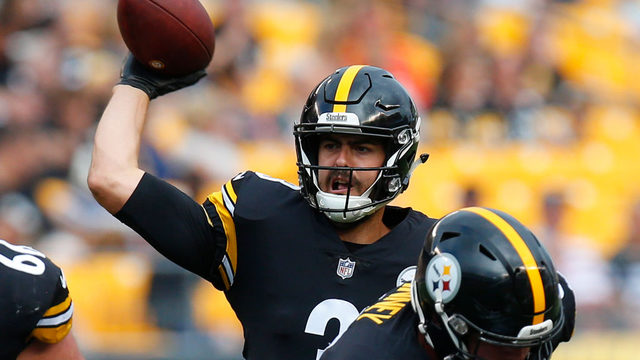 There’s a good reason I’m not the General Manager of the Pittsburgh Steelers. I say this because the moves made by Kevin Colbert on Saturday are not exactly in line with what I would have done let’s just say that. Here’s a look at the more puzzling moves from cut-down Saturday.

Jones was the more expensive of the three so I get this financially. But the fact that the Steelers are comfortable with two guys who’ve never taken a regular season snap backing up Ben Roethlisberger is head-scratching. I think there is a very strong possibility that Jones returns at some point but I’m still a bit stunned by this.

I’ll never understand why Mike Tomlin and Colbert continue to keep the services of Grimble. He has spent most of this preseason hurt while Hodges has improved every day since joining the team. He’s not a great blocker or huge receiving threat but he’s been adequate at both and I can’t always say that for Grimble. Hodges would have a fit a very solid number three tight end role.

You will never convince me that Kevin Colbert doesn’t hang on to players longer than necessary simply because he wants to prove their selection in the draft wasn’t a mistake. For further evidence I submit McCullers who is a mountain of a man but his motivation and overall play continues to leave me uninspired. Hooks meanwhile has been good against the run and has also flashed some ability to get to the quarterback. I really believe Hooks was more deserving but because McCullers was a draft pick he’ll get the benefit of the doubt.

Who Exactly Did Jordan Berry Beat Out?

I mean no disrespect to Matt Wile but Jordan Berry should not be on this roster and I’m still confident that the Steelers will make a move here by the opener a week from today. Berry’s only endearing quality is that he can pretty routinely drop punts inside the 20-yard line. Now that’s pretty important, don’t get me wrong, but his inability to get off big kicks and flip the field when necessary is just as important.

Despite yesterday being the formal “cut-down day” there are still many more moves coming from the South Side. Practice Squad shuffling, waiver wire hunting and a potential trade or two are all on the table.

My 2 cents, Dump Bell now, We could have used the money on Mack. LeVeon Bell is not a game changing champion quit acting like he is 4.0 per carry and dump off passes. Time to move on, and if we really are going for a title make a move. Doing what we are currently doing with Bell makes no sense. Get some good players who want a title and let’s do it.