Good Tuesday to you Steelers’ Fans!!

As we all wait to see if and when Le’Veon Bell will show up I wanted to offer some final, personal thoughts on my relationship towards Landry Jones. I hated the drafting of Jones in 2013. I fully believed that the Steelers would have been better served drafting a cornerback or linebacker or tight end. I saw Jones as just another Big 12 quarterback because in that conference, I’m pretty sure my dog could throw for 300 yards and three scores. What do I mean? I mean that Jones didn’t have the proper skill set in my mind to be a starting NFL quarterback but the pick was in and there was nothing I could do about it. In the three years leading up to Jones’ selection, Ben Roethlisberger had missed eight games for a variety of reasons so it was clear to me that Mike Tomlin and Kevin Colbert felt they needed to select a quarterback.

So many have therefore asked me “why do you support Jones now if you never wanted to draft him?” It’s a fair question but it isn’t well thought. Jones became a capable back-up quarterback and that was all I ever hoped. Dreams that he would one day take over for Big Ben were silly in my opinion. Jones would end up with a 3-2 record, appear in 19 games and end up with a respectable passer rating of 86.2. When this preseason unfolded, I didn’t think the QB situation would really be all that interesting. Josh Dobbs changed that with his very good play. Still, I couldn’t envision the Steelers going into a season with so much talent but with two guys backing up Roethlisberger who had taken ZERO REGULAR SEASON snaps. That’s the reason I “flipped” on Jones. I wish him well and won’t be a bit surprised to see him back with the Steelers at some point.

Tweet of the Day… Cam is not happy with the wussification of America!

Kids get early dismissal because it’s too hot in Pittsburgh?! This is crazy! This has never happened in my schools. I know parents are ticked off today lol

So Mr. Bell has yet to report. Many figured it would be Monday. Maurkice Pouncey says it will be Wednesday. Here’s what I know… If Bell doesn’t report by Wednesday then he likely won’t play Sunday. Gameplans are usually installed then and he won’t know enough to be involved. Adding to that, if he doesn’t show Wednesday, then I think we could be in for a very long and quite unsettling holdout.

To be very honest, I’m OK with Bell being gone. I’m over him and I’m tired of the constant drama.

The Steelers added Nat Berhe to the active roster yesterday which was not a surprise. They also put Ola Adeniyi on the Injured Reserve/Able to Return list. That essentially makes this coming year for Adeniyi a ‘redshirt’ season if you will.

I see where some people are burning or destroying their Nikes over Colin Kaepernick being named a pitchman for the company’s 30th anniversary of the “Just Do It” campaign. I don’t really know where to begin with this… You’re free to do whatever with your possessions. 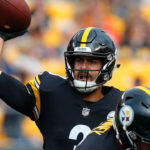