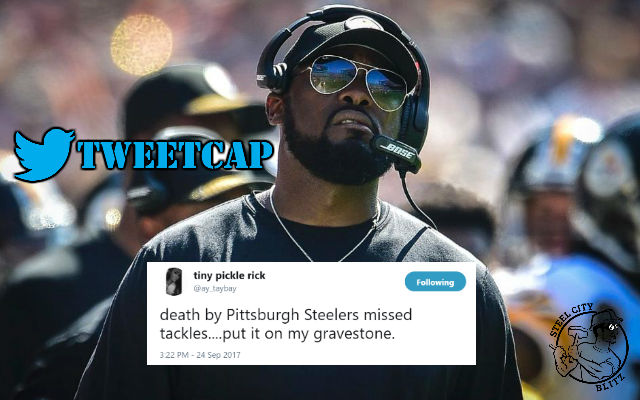 The Steelers went into Chicago and dropped another winnable game to an inferior opponent on the road outside of Eastern Standard Time. As you can imagine, Twitter was LIT.

The big story before kickoff was that the Steelers would not take part in the National Anthem.

Mike Tomlin just told me @NFLonCBS #Steelers will NOT be participating in the #NationalAnthem today in CHI. Staying in the locker room.

Mike Tomlin. No players behind him. pic.twitter.com/GYR0M4EyvR

Once the game started they didn’t seem too interested in taking part in it either.

live look at Eli on that punt return pic.twitter.com/ZLVcX0XDgq

Sack and fumble by Roethlisberger Bears recover at midfield. Ramon Foster down for #Steelers.

Somebody run down to the Steelers locker room and tell them the national anthem is over they can come out now?

This is how bad teams win games. Lack of ball protection by the better team. Chicago takes over about midfield

Bears had chance to go up 10 with no passing yards yet. Missed FG. Steelers back to work.

Wow steelers playing down to another crap team. Boy like we havent seen this before!!

There is the Markus Wheaton #Steelers fans know and love…but a roughing the passer call extends the drive. This is horrible

The Steelers would finall put together a good drive and move it down the field.

#Steelers WR Antonio Brown (@AB84) has set an NFL record for the fewest games to 650 receptions with his second today in his 104th game.

Steelers turning to no-huddle to try to create a spark, which can help an O-line missing two starters. Quick first down

#Steelers James grab and gets popped but holds onto ball. Tough kid from Glassport #WTAE

That powerful run up the gut for a first down? That's why the Steelers kept @azusapacific's Terrell Watson.

AB would cash it in for six.

But the defense still was MIA.

Pretty sure they matched that number on that play.

The Bears scored another easy touchdown to go up 14-7.

#Steelers on the road versus weak opponents #UnderWhelming pic.twitter.com/sHRPQ4cAUg

This team just looks uninterested again in away game. Bizarre.

On a weird play to end the half, Boswell’s field goal attempt was blocked but the Steelers ran down the returner and knocked the ball out. Jordan Berry batted it out of the end zone for a safety or touchback or something?

The call wound up giving the Bears the ball on the 1.

Absurd. Mike Tomlin sends team to locker room. Defense barely gets back on field in time. Then Bears false start from 1-yard line.

Great hustle play, but my goodness the Steelers are really doing everything to blow this aren't they?

What a circus this game is. Kind of like the NFL.

In the second half, the offense started where they left off.

Le'Veon Bell has surpassed Antonio Brown for the most catches by a #Steelers player in their first 50 games with the team with 237+counting.

Our weekly tweet comes in quarter 3. Antonio Brown is good at football.

The defense even generated a turnover when Shazier forced a fumble and recovered!

The #Steelers defense creates a turnover to open the second half. Ryan Shazier causes and recovers a fumble. Now the offense needs to score.

It STANDS. Wow. A break

The offense took advantage of a short field and got the game within 3, mostly on the ground.

Second game in a row Ben's had a stretch with five straight incompletions.

Empty set and no one can get open. Flag avoids Steelers' Twitter meltdown.

Antonio Brown and Le'Veon Bell have both scored their first TDs of 2017 in today's game.

The Steelers run defense is getting punked today.

death by Pittsburgh Steelers missed tackles….put it on my gravestone.

Hargrave came up with a sack, which essentially ended the Bears drive.

Easily the most consistent defender today has been @Jay_MostWanted. #Steelers

After an exchange of punts, the Steelers would come up with another turnover.

Mike Glennon completed more passes to the Steelers than he has to his own WRs.

Boswell would tie it with a field goal and the defense would hold.

Bears will punt. Steelers will get the ball with just over 5 minutes to go.

Bears fans, who watched team lose 29-7 last week, boo them for being tied with 5:12 left today

Unfortunately the offense couldn’t get a first down after a holding penalty.

Bears are handing the Steelers this game will they take it. Come on Supposed Super Offense #Steelers

This offense on 3rd downs is abysmal. Ben keeps forcing it deep

The Bears have fumbled twice and threw what should have been an interception IN CONSECUTIVE PLAYS. And they still have the ball.

With that catch, @AB84 has passed John Stallworth for the 2nd-most receiving yards in #SteelersHistory. pic.twitter.com/aPjY6oOyo7

No one could do anything in the closing minutes and the game went to Overtime. Tarik Cohen seemingly scored a long TD when a blatant hold when uncalled.

That was an astonishingly blatant hold.

But they called him out of bounds.

The ruling on the field is that the runner stepped out of bounds.

A few plays later though, the Bears walked it off.

That's the most horrendous display of tackling I've ever seen in my life. The Tomlin trap game strikes again. Embarrassing.

This defense is gassed. They can't stop this running attack

That was the worst defense I have ever seen. That's just embarrassing. EMBARRASSING. 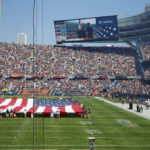