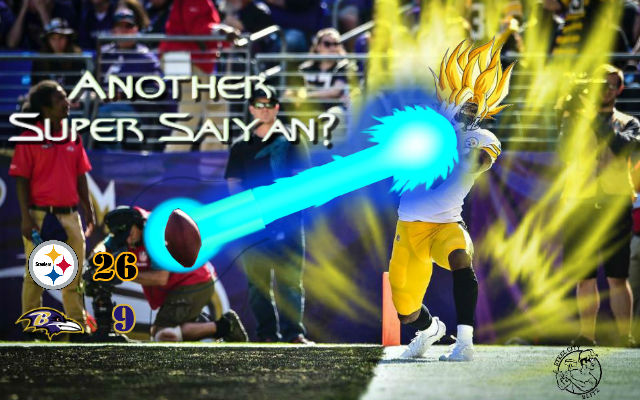 After dropping a winnable game in Chicago last week, the Steelers went in to Baltimore to face their hated rivals. The Ravens have been decimated by injuries this season and were playing on short rest after travelling to London last week to get their butts kicked by the London Jacksonville Jaguars.

Things seem to pick up right where they left off as the Ravens ran an outside zone play right off the bat and it went for 23 yards down the right sideline.

The Steelers tightened up after that and held on defense, forcing a punt.

The Steelers started pinned back inside the 5. For all their talk about simplifying their gameplan this week – it paid off. They gave Le’Veon the ball and he finally started to look like Le’Veon again. Bell took them out of the shadow of their own goalposts then James Conner ripped a big run over the left side. Two short passes from Ben moved us into Ravens territory then it was back to feeding Le’Veon. Bell took us into the red zone but the drive stalled out fter a false start and holding penalty. Boswell ended a beautiful 15-play 10-minute drive by getting us on the board first.

The teams traded punts early in the second quarter. The most exciting thing that happened was AB going all Sean Rodriguez on a gatorade cooler after Ben checked down to Le’Veon instead of throwing it to a WIDE OPEN AB.

After the game, AB confirmed his route was part of the play design, which was drawn up beautifully by Todd Haley.

Flacco tried to go deep for Mike Wallace down the sidelines, but to the surprise of literally no one Wallace dropped it.

Ben had him open, just didn’t throw it to him. Of course, everyone knew that on the next series the Steelers would come out and throw deep to AB. Which they did, but it didn’t connect. Nevertheless, they were able to pick their way into field goal range on the legs of Le’Veon Bell and thanks to a third down conversion by JuJu. In the Red Zone for the second time, the offense shot itself in the foot again by taking a personal foul penalty that put them in a 3rd and 29 situation. Boswell was able to rescue things by drilling a 49-yarder.

After a sack on the previous drive, Cam Heyward continued his monster afternoon by forcing a fumble and falling on it for the recovery. Cam Heyward has reached a new level of awesome this season.

Ben hit Jesse James to get us into the Red Zone then Le’Veon and James Conner took over from there. Le’Veon converted a 3rd down inside the 10 then took it in one play later.

Another 3-and-out punctuated by Stephon Tuitt slamming the door on a 3rd and short run gave the Steelers the ball back with just over 2 minutes to go in the half. The Steelers didn’t display a ton of urgency on the two-minute drive, continuing to feed Le’Veon early, but got the ball across midfield thanks to a big third down conversion by Martavis. Ben hooked up with Martavis again to get us into the red zone and the Steelers burned their last timeout with 50 seconds left.

Two plays later, Ben found JuJu wide open across the middle and he walked in for his second touchdown of the season. JuJu then endeared himself to everyone who was a teenager in the late 90s/early-2000s by doing a DragonBallZ Kamehameha touchdown celebration.

The Steelers went for two to try to make it 21-0 but didn’t convert so we were left with a weird 19-0 scoreline and your brain started processing all the weird ways we could lose this game.

Because the Steelers had stopped the clock for no particular reason, the Ravens had time to get across midfield. Justin Tucker came on to attempt a 62-yarder, which he left short. Joe Haden tried to return it but CBS screwed up the camera work royally and didn’t show the play on the field.

The Steelers got the ball to start the second half and produced one of the weirdest plays in NFL Officiating History. On third down, Antonio Brown caught a pass on a shallow cross, tucked the ball away, took three steps, was tackled and his knee hit the ground. As he rolled over, the ball popped out of his hands and into the air, into the arms of Eric Weddle. The refs blew the play dead, preventing Weddle from running to the end zone uncontested. For some reason, Harbaugh challenged. Everyone and their mother thought this was the simplest call to uphold in NFL history. But they forgot the fact that it was NFL Referees making the decision.

The ruling was somehow changed to an interception (it couldn’t be a fumble because the ball never touched the ground) because Antonio Brown didn’t “complete the catch while going to the ground” despite having taken 3 steps with the ball in his hands.

The Steelers defense held and Mike Hilton got a timely thrid down sack to force a field goal.

The Steelers drove it back down the field, getting a big third down conversion near midfield by JuJu over the middle. They nearly set things right again and atoned for the weird officiating decision, but Chris Boswell missed a field goal.

The Ravens went right back to the outside zone and rolled off a 50-yarder. Two plays later, Flacco found our old pal Mike Wallace in the end zone, who surprisingly didn’t drop this one. The Ravens went for two and got it, but after the commercial break we came back to a review and the refs ruled the runner down by contact before crossing the goal line, so it was (thankfully) back to a two-possession game at 19-9 instead of 19-11.

The game devolved into a punting battle. The Steelers took a penalty which essentially ended their drive and Flacco was sacked by Tuitt and Dupree, ending theirs. After a 3-and-out by the Steelers, the Ravens were able to get the ball out to midfield but pressure on Flacco forced a back-footed pass right into the arms of Ryan Shazier. Flacco looked like he was trying to throw to a tight end underneath but Shazier ran the route better than the tight end and came away with the interception.

The Steelers couldn’t do anything with it and punted it right back to Baltimore. Thankfully, Joe Flacco is not elite. In fact, he sucks. The Ravens got back near midfield, but Flacco threw a fourth down interception to Mike Hilton.

That’s a sack and a pick for Hilton for those keeping score at home, continuing his reputation of being “always around the ball.”

Le’Veon Bell took the game over from there and wore down the Ravens defense. The put the team on his back and carried us down into the red zone. Ben got a free play on a defensive offsides and hit AB on a quick slant that he nearly got to the goal line. Le’Veon punched it in on the next play to seal the victory.

The Ravens got another drive with 2 1/2 minutes left but it really didn’t matter. The Steelers were up by 17. The Ravens drove all the way down inside the 5 but the Steelers stood tall and forced a turnover on downs.

This was the Steelers largest victory ever in the city of Baltimore and only the 4th time the Steelers won there by more than a touchdown. The previous largest win was by 13 points over the Ravens in 2002. The largest win over the Baltimore Colts was by 11 points in 1983. Don’t look now, but the Steelers are alone in first place in the AFC North. 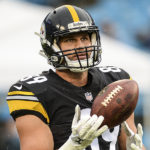