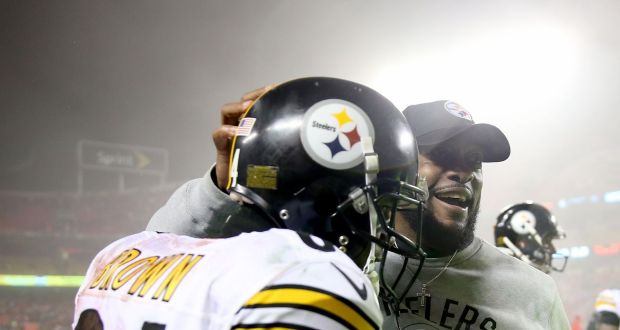 It would seem, that as of this writing, that we have yet to give Antonio Brown’s live airing of his head coach’s comments a proper name. Any type of scandal or controversy in the National Football League almost always gets a name doesn’t it? From Spygate to Bountygate to Deflategate, doesn’t this need some form of ‘gate’ treatment? What occurred in the Pittsburgh Steelers’ locker room following the team’s win over Kansas City has brought up two key issues in my opinion and one will have far more repercussions than the other.

To start off, what Mike Tomlin said is not false. The New England Patriots do in fact have a significant advantage over the Steelers in terms of preparation. The Patriots dispatched the Houston Texans and were already leaving the locker room before the clock struck midnight Saturday evening. Meanwhile, the Steelers had to board a plane and head back to the Steel City where they didn’t arrive back until the wee hours of this morning.

So… That is in fact a significant amount of time the Patriots and their staff have to start working towards the AFC Championship Game. Personally, it is what it is. Would I like to see the field leveled a bit more? Yes I would but there’s nothing we can do about it now.

Coach Tomlin also referred to the Patriots as ‘assholes.’ While not a term of endearment, if you listen to how Tomlin used the term, it really isn’t as bad as the media and talking heads will make it out to be. Furthermore, I’m guessing there are far more people across America who agree with Tomlin’s choice of words for the Pats than those who don’t.

In both cases, what Tomlin said should have no bearing on anything. It’s locker room talk that goes on all the time and regardless of what the Patriots say today and through the week, don’t buy it.

What you can buy is the fact that Antonio Brown has set a bad precedent for his teammates and for his fellow players across the NFL. He has shown live video from the locker room on several occasions prior to this but never before have we been granted access to Mike Tomlin’s comments. If Brown hasn’t already received a ‘stern talking to’ today by someone named ‘Rooney,’ ‘Colbert’ or ‘Tomlin’ I’d be extremely surprised.

As much as fans would like access to every second of their team’s life, there are some things that are sacred. Those things occur in the locker room and in my opinion should not be broadcast for anyone to hear other than the people within those walls. Brown violated that and should have ‘cut tape’ as soon as Tomlin started speaking.

Because he didn’t, Tomlin’s words were out there for general consumption.

I have zero reservations about suggesting this won’t happen again. I firmly believe the Steelers, if not the entire NFL, will ban live feeds from the postgame locker rooms. If fans don’t like it, too bad. It’s coming. Some will suggest that this is Tomlin’s fault. I’ve already seen and heard the “Cowher and Noll would have never let this happen” stuff.

The bottom line is that what happened, happened. People will learn from it and people will be told what is right and what is wrong but this is already way more overblown than it should be. Changes will be made and the people involved will learn.

On to New England.