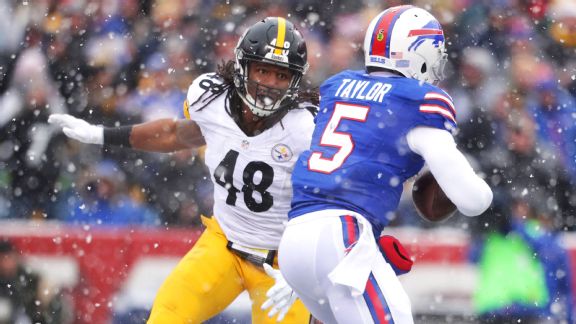 Bud Dupree played in seven games in 2016, but started only four. In those four games, he totaled 4.5 sacks. I wanted to see how he earned each sack and wanted to get an idea of how he looked mentally and physically. After watching and analyzing each sack, I broke down and relayed exactly what I saw.

Dupree tries to power the right tackle and it does not work. He keeps his eyes on Tyrod Taylor and as Taylor rolls out, Dupree disengages and runs the speedy quarterback down from behind. Dupree displays athleticism and a fantastic motor, especially after his initial power move failed to breach and create initial pressure.

Shooting the B-Gap (the gap between the guard and the tackle), Dupree beats the right tackle off the bat with his first step and athleticism. Dupree gets to Taylor, but then gets shrugged off. Getting up immediately, Dupree then chases down Taylor across the field for a sack. Again, excellent motor and relentlessness demonstrated.

** The .5 sack is from a QB designed rush, not going to highlight it here.

Dupree shoots for the A gap and is immediately handled by Marshal Yanda, one of the best offensive guards in the game. Dupree then disengages, reads and mimics Joe Flacco’s every move. As the pocket collapses due to other defenders, Dupree darts towards Flacco and takes him down. Again, not winning initially, but maintaining definitive space and reading the quarterback and the situation. Another smart and heads up play by Dupree by letting the play essentially play out and work to his advantage.

Dupree starts with a quick burst get-off. Former first round pick in right tackle Cam Erving cannot handle the athleticism of Dupree and a small bit of hand-fighting. Dupree continues to bend around the corner at full speed and goes for the football, not the quarterback, forcing the fumble (recovered by the Browns). This is exactly what the Steelers want to see from Dupree. This particular sack is very Von Miller/James Harrison-esque in terms of going for the football and not the big hit entirely (Troy Polamalu had a knack for it, too). Erving isn’t very good and is originally a center, but Dupree was mechanically excellent from start to finish.

The sack against the Browns is what the Steelers want to consistently see from Dupree. From the snap of the football to the battle against the right tackle, to reaching the quarterback, excellence was put on display. Beating the tackle, forcing the fumble and earning the sack gave the defense an opportunity to force a turnover or pin the offense back.

Sack numbers one and three are smart, high football IQ sacks which rely on his teammates. By that I mean he relies on the coverage or other pressure to put his self in a situation and position to make the sack. Sack number two is a great representation of an excellent motor and work ethic. This should not be undervalued. Yes, Dupree should have made the initial sack, but do not let that take away from him getting up from the cold, snowy ground and chasing down a very fast quarterback. Also of note, in 2 of his 4 sacks, Dupree was shooting gaps instead of traditionally being on the outside shoulder of the tackle.

We are all expecting a big year from Dupree and praying he stays healthy. In 2016, James Harrison led the team in sacks with five. Expect Dupree to reach or exceed double digits in 2017.

[…] if he can stay healthy. I broke down Dupree’s sacks in 2016 in an article, which can be seen here. The Kentucky product needs to show he can win from the edge, beating tackles and developing a […]