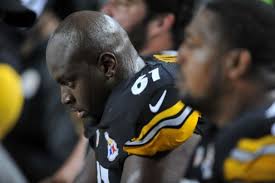 When Maurkice Pouncey went down in the very first game of the year the overwhelming thought in the Steeler Nation was “we’re screwed.” While the loss of Pouncey was difficult, it was made much less significant with the signing of free agent Fernando Velasco.

To say Velasco has been solid in replacing Pouncey would be a vast understatement. Fact of the matter is that Velasco has been the rock of this offensive line which has suffered one blow after another.

The demons that hover over this unit finally got to Velasco on Thanksgiving night as he went down late with a torn Achilles’ tendon which ends his season.

Using the ‘next man up’ mentality, Mike Tomlin is forced to go with Cody Wallace who came in to play on the Steelers’ final two offensive plays Thursday night. Wallace had already been signed when Pouncey went down so that kind of tells us the confidence that Tomlin has in Wallace. To further that point, the Steelers signed free agent Eric Olsen who plays center as well.

The thinking right now is that Wallace will probably start on Sunday. The extra days will give him time to get up to speed with the offense and with Ben Roethlisberger.

The loss of any player is always troubling but this team has seen its’ share of injuries that just seem to keep mounting for this unit. The offensive line had been so much better in protecting Roethlisberger over the last three weeks and Velasco was a big part of that.

There had been a lot of speculation as to whether Velasco would possibly be back in 2014 but I think that probably goes out the window now. NFL players struggle to come back from Achilles’ injuries at a very alarming rate.

Regardless, Velasco will not go down as one of the all-time greats in Pittsburgh but he will be remembered as a guy who at the very least gave the 2013 Steelers a chance in an otherwise poor year.