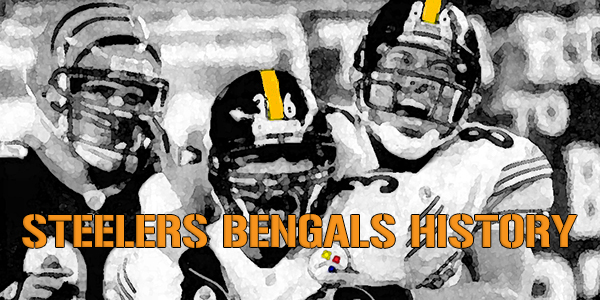 The Pittsburgh Steelers have a 32-19 record in Cincinnati and haven’t lost since 2014 including that brutal playoff game in 2016.

2005 saw the Steelers and the Bengals fight a close battle throughout the season to see who would win the North division. A streak of three losses from week 11 for Pittsburgh, including defeats by Baltimore and Cincinnati, swung the title their rival’s way.

The Steelers had slumped to 7-5 after a week 13 loss to the Bengals in Pittsburgh, but they subsequently went on a roll. Four straight wins saw them enter the playoffs as a wildcard.

The season finale saw Jerome Bettis make his final appearance in front of his adoring fans who were willing the team onto the Super Bowl in his hometown of Detroit. Bettis set Heinz Field alight scoring three touchdowns.

Both teams finished 11-5, but the Bengals took their first title for fifteen years with a superior record within the division.

The Bengals needed to win their final two games to earn a bye in the playoffs, but they lost both including a 37-3 thumping in Kansas City. The consequence of the Bengals slide saw them host the Steelers in the wildcard game.

Heisman Trophy winner Carson Palmer was the overall number one pick in the 2003 draft. Going into his first playoff game, the Bengals quarterback acknowledged, “You get the goose bumps going into this week on Monday and Tuesday. You realize how big of a game it is and how big it is for the city and this organization.”

The game also meant a lot to Jerome Bettis. “Early in the season I had some shirts that said, ‘Detroit or bust,’” he explained. “That’s all we’re playing for, and I told the guys in the locker room that we had to get there because I’m running out of time.”

Hines Ward was more to the point, “They won our division. It’s redemption time. We get that opportunity, and we feel good because we won in Cincinnati (during the regular season).” 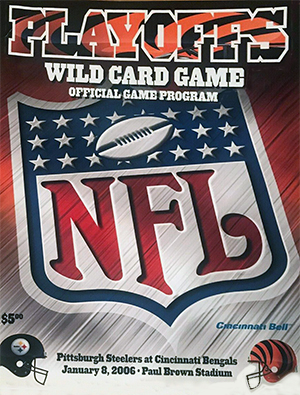 The Steelers were forced to punt on the game’s first series. On Cincinnati’s second play of their drive, Palmer was poised to throw a pass. He waited an extra second to allow rookie Chris Henry to run pass the Steelers defense and get open. That one second cost his team dearly despite Henry’s 66-yard completion, which set a Bengals playoff record.

Steelers nose tackle Kimo von Oelhoffen’s dive on Palmer knocked the quarterback out of the game with torn knee ligaments.

Palmer was replaced by Jon Kitna and the Bengals finished their first possession with a field goal. Kitna extended their advantage with a touchdown pass to Rudi Johnson at the end of the first quarter.

The Steelers replied immediately with a drive that finished with Roethlisberger finding Willie Parker out of the backfield with a 19-yard touchdown pass.

The Bengals increased their lead with a 7-yard touchdown from T.J. Houshmandzadeh. Although Cincinnati were playing with confidence despite the loss of Palmer, Roethlisberger was also looking supreme.

After throwing a rocket of 54 yards to Cedric Wilson, Roethlisberger found Ward with a 5-yard touchdown pass to reduce the Steelers half time deficit to 17-14. Coach Cowher later commented, “There were so many positive things going on by halftime. To not play very good at the start and be down by only three points, that was big.”

In the second half, the Steelers took control while the Bengals gave up on the win. With the ball on the Steelers 15, Cincinnati attempted a field goal. The home fans were stunned as the ball sailed over the holder’s head and their team lost possession on downs.

Helped by a shortened field, the Steelers took their first lead of the game. Bettis fought his way into the end zone on a 5-yard touchdown run and the Bengals demise reached rock bottom.

A bad punt gifted the Steelers another short field and Pittsburgh’s offensive coordinator Ken Whisenhunt sent in a gadget play. A direct snap to Antwaan Randle-El saw him pass back to Roethlisberger who launched a 43-yard bomb to Wilson to extend the Steelers lead. It was the Steelers fourth touchdown in five possessions as they reinforced their control.

A James Farrior interception set Jeff Reed up to kick a field goal from 21 yards in the final period to seal the Steelers 31-17 victory.

After the game, Ward declared, “This is what it is all about – the losers goes home. They may have won the (division) championship, but we are still alive in the playoffs.”

Coach Cowher said of his quarterback who earned a 148.7 rating, “He made some big plays, some big scrambles and very good decision-making.”

As the players left the field, the biggest cheer from the Steeler fans was reserved for Jerome Bettis as chants of “Four more years, four more years,” resounded around Paul Brown Stadium.

Pittsburgh’s win saw them travel to Indianapolis for the division game which they edged 21-18 ahead of winning the AFC Championship in Denver 34-17.

The Steelers went on to win their fifth Lombardi and Bettis ended his pro career in his hometown with a Super Bowl ring.