As of this writing Steelers’ Head Coach Mike Tomlin will keep Randy Bullock around the Steelers’ facility for the time being. Chris Boswell appears to be in line to return for Sunday in Buffalo but as of right now, Bullock will stay. Keeping two kickers on an active roster for gameday isn’t unprecedented but it would certainly have a unique quality. What will likely happen for this week is that both guys may give it a go during warm-ups and then Tomlin will choose to make one inactive. What is also possible is that if Boswell is 100%, they could release Bullock Friday or Saturday. One way or another, we saw the importance of having a viable backup option on Sunday.

It has apparently become en vogue to suggest Le’Veon Bell has a “fumbling problem.” In 1,042 career touches, he has fumbled a total of five times. If you’re a math person, his percentage is so ridiculously low that I’m not going to bother typing it. Yes, Bell has put it on the turf four of those five times this year but I’m not going to suggest he’s Tiki Barber as some are.

Lawrence Timmons is playing really well right now and I think part of the reason is that Keith Butler is finding more ways to keep him from having to cover receivers. Let’s face it; Timmons is still a very important player but his skills are just not what they once were when it comes to covering backs and receivers. Good move by Butler.

Tweet of the Day… A proud father for sure!

Looking forward to seeing my son at the Army: pic.twitter.com/vw6Hug12WM

Right now, the forecast for Buffalo on Sunday is, wait for it….. SNOW!! Sounds like the same front that’s coming through my neck of the woods starting today. I am not concerned with our passing attack. Big Ben is usually fine in the snow.

Talk about extremes, Buffalo is number one in the NFL in rushing offense. They rank dead last at 32 in passing offense.

Sounds like Arthur Moats will be the Steelers’ representative for the NFL’s Walter Payton Award. He is extremely worthy and I hope he wins! 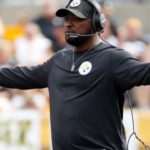