Former Pittsburgh Steelers’ left tackle Alejandro Villanueva was scheduled to meet with the Baltimore Ravens this week. Yeah, you read that correctly. I’m not going to rush to judgment and say “He’s not signing there” because for all I know he could. But lets analyze this a bit shall we? For starters, we’ve seen this ploy before from John Harbaugh’s team and perhaps more specifically from the New England Patriots. What they do is look at players who other teams “may” want to re-sign. Then they invite them in and offer them more money than the original team (in this case the Steelers) forcing that team to make a decision. Either I pay more than I wanted to for this player or I let him walk to a rival. Whether that rival actually wants this player doesn’t matter. They can keep him or structure the salary in a way that releasing him means very little. The most recent example of this was when the Pats entertained Anthony Chickillo, offered him more money and the Steelers felt they were forced to match and did so. Frankly it was a stupid move by the Steelers despite how valued Chickillo was on Special Teams. Bottom line here is the Patriots forced the Steelers to pay way more than they should have for a backup EDGE rusher. Let’s think about Villanueva in Baltimore for a second. Does he really fit what they do offensively? Hardly, which makes this situation even more curious. Big Al knows he is not guaranteed a starting spot whether in Pittsburgh or Baltimore. He also knows his biggest pay day is behind him. My gut tells me he’ll still come back and battle Chuks Okorafor for the left tackle job but I won’t be a bit surprised if he retired either.

Like everyone else I had some thoughts on the three-year extension for Mike Tomlin.

Tweet of the Day… What a talented dude he was.

Mock Draft Simulators are not necessarily made to be perfect. In fact they are far from it. Do they have a usefulness? Of course they but they also provide a strong sense of what actually WILL NOT happen in the Draft. For instance, when you force a trade that allows the Steelers to move from 24 to 11 and you don’t have to give up very much? That’s not realistic at all. It gets worse when people do this then share it on social media. It spreads some really bad information that too many people will take as fact. It’s now to the point where its worse than conducting trades on the Madden video game. If you aren’t going to be realistic then why bother?

Coming up Thursday night we’ll have an extended edition of the SCB Steelers Podcast presented by DEK Roofing of South Florida. In the first segment, Tony Pauline of The Pro Football Network will be joining us to discuss the Steelers and the Draft. The second part of the show will be us discussing how we would proceed in next week’s Draft. 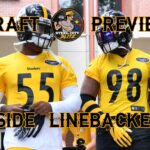