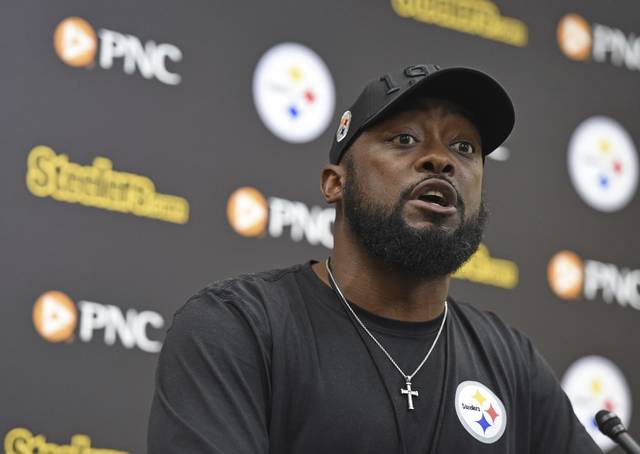 Earlier today the Pittsburgh Steelers announced they had granted Head Coach Mike Tomlin a three-year contract extension. This will carry him through the 2024 season. It would also mean that, should he complete the entirety of the deal, that he would be the coach for 17 years. This season he will pull even with Bill Cowher with 15 seasons at the helm each. At the end of this extension he would still be six shy of catching Chuck Noll. Stability and continuity are hallmarks of the Pittsburgh Steelers and this announcement confirms this but not everyone is going to be happy.

Tomlin has become in recent years a bit of a difficult talking point for many Steelers’ fans. Yes, he consistently fields competitive teams that have won seven division titles, two conference titles and a Super Bowl during his 14 seasons. But his detractors will also point to his less than stellar postseason record (3-7 in his last ten) which now rests at 8-8 following last season’s crushing loss to Cleveland. Despite entering his 15th season in charge of the Black and Gold there is still one question that never seems to be answered. Just how good of a coach is Mike Tomlin?

There are those that will point back to the Antonio Brown saga and place blame on Tomlin. “He’s too much of a player’s coach… He doesn’t know how to control these guys… The players have too much say.” There’s no question in my mind that things did get too far out of control. Brown live-streaming while his head coach was addressing his team following a playoff win is a good place to start isn’t it? Others will suggest that Tyson Alualu, Vince Williams and JuJu Smith-Schuster all came back because they knew the ‘freedoms’ they have under Tomlin.

Or maybe they just feel like playing for Coach Tomlin is their best chance at winning and becoming better players. Former Steeler Mike Wallace said just yesterday that “nothing compares to playing for the Steelers.” He would know because he’s had stops in several other NFL cities with which to compare. Brett Keisel tweeted this just moments after the announcement was made. Let’s also keep in mind that Tomlin is notorious for having some of the most demanding training camps in pro football too.

Those good feelings aside, late season collapses and playoff losses feel like more the norm lately than rare exceptions. His teams were always good enough to overcome in-game mismanagement or preparedness issues but that’s not the case of late. The NFL is a “what have you done for me lately?” type of business regardless of how difficult it is to reach a Super Bowl.

Perhaps Tom Brady winning his seventh has made us all feel like getting to a Super Bowl isn’t that hard. That’s just not the reality of the situation though. Tomlin understands the struggles and the fight it takes to get to the Super Bowl but I’m not confident that he’ll see another one in Pittsburgh. It’s likely now that he’ll oversee the transition from Ben Roethlisberger to whoever the next quarterback is and that’s no small task either.

By the time you’ve made it to this part of the article you must be wondering where I really fall on the subject of Mike Tomlin. If that’s the case, good, I wanted it to be that way because that’s very much how things are in life anyway. I see and respect the positive and negative opinions of Mike Tomlin’s tenure as the Steelers’ Head Coach. There are plenty of both to go around.

I would have much preferred the Steelers added a year to his deal rather than three because I don’t like what I’ve seen in recent seasons. Opportunities have been squandered whether due to injury, poor coaching or poor play and that’s frustrating to me and it’s also part of the game. I have always appreciated the patience of the Rooney Family and the organization in general but this hasn’t been the 1980’s talent-wise where excuses were ready made. More should have been accomplished in recent years but now Tomlin will have a chance to get it right. If he can’t in the next three seasons then he should be out of chances.

In my opinion Tomlin’s weakness is his predictability. He plays to what he considers his strengths and doesn’t make in game or even in season adjustments. Yes his record is pretty impressive but is he getting everything he can and more out of his team?? As the season goes on other teams know exactly what we are going to do on both sides of the football. I don’t expect to see a much different team this season. The defense will be well above average and the offense will be very predictable. Great teams/coaches have the ability to raise their level of play as the season progresses. That hasn’t been the case for the Steelers in quite some time.

I think that no evaluation of Mike Tomlin is complete without looking at the careers of the assistant coaches he has hired. By my last count, Mike Tomlin has zero coaches that he has hired who have become head coaches elsewhere compared to Bill Cowher’s 7 (been a while since I did the count). If you are an assistant coach coming to Pittsburgh, it’s a good place to kill your career. Even among those who were coordinators under Tomlin but hired by Cowher, Bruce Arians and Dick LeBeau stand out. In both cases, Tomlin announced their “retirement,” which both coaches clearly refuted, and both went to be head coaches elsewhere – including Arians having just won the Super Bowl. Look no further than this to understand whether Mike Tomlin can win Super Bowls. The next issue with Tomlin is the Steelers identity. What is it? The Steelers have great traditions of defense and a ball control offense. In the Tomlin era, the Steelers have completely abandoned ball control culminating in playoff failures, and even our defense has had multiple years in the bottom half of the league based upon total defense. And we aren’t in a division that is exactly known for high powered offenses. As a man and on the basics of coaching, I like Mike Tomlin, but it is clear to me that Mike Tomlin can’t win the big games. The Steelers under-perform these games far more than we overperform. The consistent absence of a running game continues to plague this team, and though this is a pass-first league, the running game is the foundation to consistent winning. If you cannot run the ball to consistently move the chains or score from the goal line, you cannot win championships, and this coach seems to emphasize everything else above this foundational principle, which is why Steelers’ house crumbles at the end of every year.