A lot of us think that it takes forever for that first game of the season to kick off and there’s truth to that. But at least there is other football – preseason, college, etc – to get us through. The NFL Draft is worse. There is NOTHING to satisfy our need for football until the Draft actually begins. I suppose you could pull up old games or highlights but that’s just not for me at that time. So here we are just one week away from the 2021 NFL Draft. Anyone telling you they know who the Steelers are taking is lying. There are likely two people who know, Kevin Colbert and Mike Tomlin, and they aren’t saying a word. I do suspect we’ll see a few more trades made and a whole lot more in the of rumors as well.

Tonight we’ll be joined by The Pro Football Network’s Tony Pauline to get his thoughts on where the Steelers are headed in the Draft next week. Then, Ben, Ian and I will will reveal the guys we believe the Steelers are taking. Tune into the SCB Steelers Podcast presented by DEK Roofing of South Florida.

Tweet of the Day… Get your money ready people.

It was made public this week that QB Justin Fields has epilepsy.  There is some general thought out there as to this being the reason many draft experts don’t think he’s in the top QB discussion. Doctors believe he will outgrow it as other members of his family have. All I can say is that based on the action I’ve seen of him I’ve never seen it affect his ability to play. There are those that know far more than I do however. I just hope it doesn’t steer teams away from him.

The NFL announced yesterday that the 2021 schedule will be released on May 12th. This is always a highlight for fans, especially those that travel to a game or two each season. 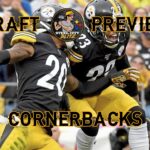