Happy Friday to you Steelers’ Fans!

The Steelers surprised many including myself when they re-signed defensive tackle Dan McCullers yesterday. “Big Dan” played thirteen snaps in 2017 and in the opinion of us at SCB, believed him to be gone. We’ve been told the reason he’s back is very simple. They are letting new Defensive Line Coach Karl Dunbar get a crack at him. If he can turn him into a better player then he provides depth at a cheap price. Should he not develop then his contract will not affect the Steelers should he be cut. There is another factor here and that’s whether McCullers even wants to play football. Not everyone who plays the game makes it their priority and with Big Dan we’ve heard this is the case from what we’ve been told several times. End of the day there are no guarantees that McCullers is even with the team by the start of the regular season.

Here’s my take on Oklahoma State QB Mason Rudolph as part of our Draft Profile series.

I’m not on board AT ALL with taking a QB in this draft. If they in fact take one then someone named Josh Dobbs would likely be on thin ice. I did the profile on Rudolph simply because there is buzz around him.

Tweet of the Day… Go ahead and vote in our latest Poll!

Let me know what you think
Damien.

It’s no secret that I wasn’t a big fan of Mike Mitchell because of his play and because of his mouth at times. I’m glad the Steelers have gone in another direction in their secondary. I will say this however; Mitchell always played hard and he played hurt and for that I have great respect for him. He’s also very active in the community which is terrific as well.

Don’t know if you saw the video of Mike Tomlin’s son making a big catch down the field in what looked like seven on seven action but it was a great catch. Unfortunately, he then stands over the receiver very much like JuJu Smith-Schuster did to Vontaze Burfict. I used to get upset about this stuff but it is what it is now in the game and culture in general. I don’t like it but it’s become an accepted practice.

I’ve seen the Steelers attached to Stanford safety Justin Reid a lot in mock drafts. Something of note is that Mike Tomlin nor Kevin Colbert were at his Pro Day.

They were however at the Ohio State Pro Day earlier this week. I think the last time they missed a Buckeyes’ Pro Day was when Earle Bruce was the coach. 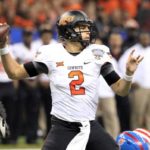