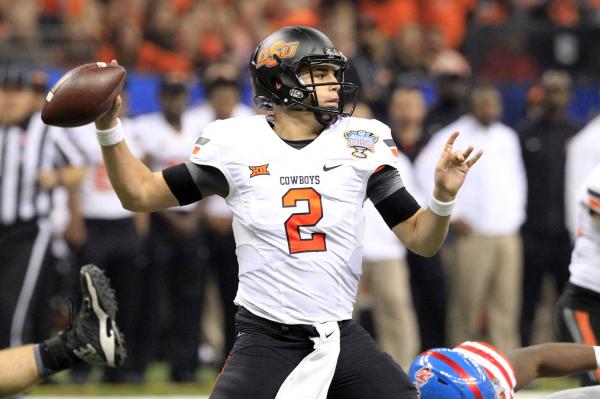 He’s been in the discussion lately because the Pittsburgh Steelers spent some time with him at the Oklahoma State Pro Day. Could Mason Rudolph possibly end up in the Black and Gold? I’m taking a look at the former Cowboy.

The Skinny: The record-setting gunslinger from OSU is not discussed among the Josh Darnold’s or Josh Allen’s of this draft but he’s making some noise in the pre-draft days.

What’s to Like: Stands tall in the pocket… Above average arm… Throws an excellent deep ball; allows receivers to “go get it”… Size allows him to shrug off defenders… Has some decent pocket mobility… Seems to take what is given right away… Not afraid to lower his shoulder and get some yardage when running the ball… Pretty decent job of letting receivers get open… Confident, willing to throw into some tight spaces… Outside of deep throws, his best throws are on slants or skinny posts.

What’s Concerning: Not overly impressed with his ball; very wobbly even in good weather conditions… Tends to be a little flat-footed (heavy legged) for my liking at times… Does not throw well on the run and ball placement on wide throws needs improvement… Throws on timing routes like comebacks or sidelines are often late which makes me wonder about his overall arm strength… Needs to develop some touch on intermediate throws… When he gets sloppy it’s largely due to poor footwork or over-striding… Has some pocket presence but panics a bit at times when he doesn’t have to.

The Verdict: Several things concern me with Rudolph. First, he spent his entire career in the shotgun. Second, he doesn’t use his lower body well which means he relies heavily on his arm (weight transfer from back to front is lacking). Lastly, I’m not sure how much “reading of defenses” he was asked to do at OSU. Those things said, the kid put up some incredible numbers in his career as a Cowboy. I have him pegged as a second or third rounder and while the Steelers seem to be smitten with him a bit, I don’t see him being ready to go right away. Obviously with Ben Roethlisberger wanting to play for three more years there’s no rush with Rudolph anyway. The problem is that there is no need for them to draft a QB in this draft. It would be a waste of a pick. I can listen to arguments if he were there in the later rounds but in a QB-driven league that isn’t happening.