For the fourth Monday in the last five weeks it’s a “Victory Monday” isn’t it Steelers’ Fans?

We should know more over the next few days about Joe Haden’s fractured fibula (see below). Do not be surprised if he returns in time for the postseason if not sooner. In the meantime, Coty Sensabaugh did an admirable job in his stead. I still expect the Steelers to consider activating Cam Sutton a little sooner than they had planned.

In retrospect, we shouldn’t be surprised by the ugly performance yesterday. Mike Tomlin had lost three straight games coming off the bye. Playing an opponent that seemed so easy to beat on paper seemed to good to be true and it almost was.

Ben Roethlisberger is not throwing the deep ball well. This is not breaking news. Two balls he threw yesterday however should not have ended up the way they did. Big Ben under-threw Martavis Bryant on the second play of the game but Bryant made no effort to come back to the ball or even try to break it up. It resulted in an interception. The other ball was to Antonio Brown and he clearly put his own health ahead of team success. Rather than run to the ball, Brown ran away from it as the safety closed in for a hit. If you don’t like hearing that than you don’t like the truth.

Jesse James is not just a poor blocker, he’s a liability. Yes, that’s a bit rough but it’s true. He is letting guys cross his face and they are getting into the backfield to blow up plays.

I love Ramon Foster. Great guy and he’s been a terrific Steeler. He’s got to get better in pass protection though. He got beat a couple of times yesterday as badly as a guy could.

I cannot say enough good things about the performance of Cam Heyward in the second half of yesterday’s game. I believe he he took the team’s horrible first half personally. He was vocal and he led with his actions as well. He was exactly what you expect from a team captain.

Huge congratulations to Brenda who won our #Nevahbeen contest last night. She and her husband will be going to Heinz Field for the first time ever on Dec. 31st!

Tweet of the day… High praise for the celebration game.

@TeamJuJu got the best celebrations in the game right now. He reminds me of a young @ochocinco

I’ve tried my hardest to accept Todd Haley but after yesterday I can’t. Let me point to two examples. First, the end around to Martavis Bryant hasn’t worked all year yet he keeps going to it. This is what we call “insanity.” Secondly, the Steelers had a first down around the Colts’ 35 yard line late in the fourth and Haley went to two straight runs that went nowhere. The lack of aggression after failing to get a first down on third, Chris Boswell missed a field goal. Game still tied. THEN, the D gets the ball back for his offense and he again sticks to the running game and only a great effort by Eli Rogers to get to the sticks saves the eventual game-winning drive. To me, that’s coaching “not to lose.”

The latest on Joe Haden is a fractured fibula. No surgery required and he’s expected to miss 5-6 weeks although it could be less says ESPN”s Jeremy Fowler.

Other than the poor end around, Martavis Bryant flashed more yesterday than we’ve seen in a while. A sign of better things to come perhaps?

The missed tackles yesterday were troubling. It again is the same problem it usually is. Defenders are not getting their heads up and are taking horrible angles.

Speaking of angles however… While Jesse James can’t block well, he sure can hustle. If you watch the blocked extra point from the end zone you’ll see that he takes the perfect angle to intersect the runner. Smart, hustling play.

And speaking of the blocked PAT… It was the right side that caved. An earlier season blocked kick was the result of the left side caving in. Danny Smith has work to do.

JuJu Smith-Schuster is WAY ahead of where I thought he would be and to be honest, the Steelers should be damn glad of this. He has routinely bailed them out on third downs this season which is something Hines Ward (who he is often compared to) was so good at doing. 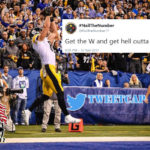 Ben still isn’t getting it in the kiddie pool. And if that continues we ain’t going nowhere in spite of our record.

He had two nice deep throws yesterday. One that JJSS caught on the sideline and the one that AB alligator-armed. But overall, I agree. He’s still struggling.