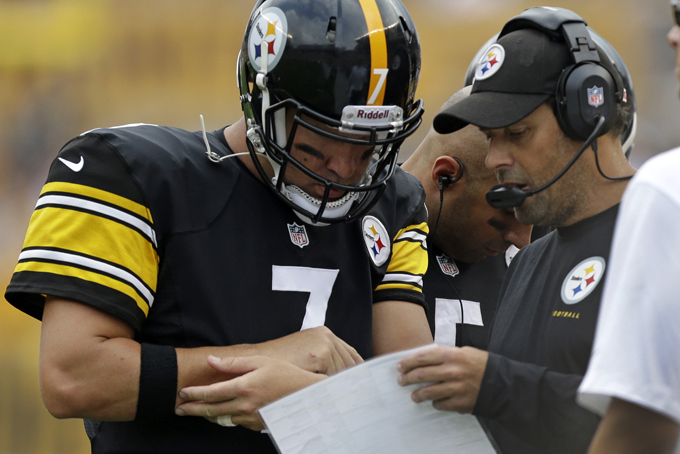 There isn’t supposed to be very much to complain about when your team is 7-2, sits high atop the AFC North and is currently the number one seed in the AFC. But there is something wrong with the offense of the Pittsburgh Steelers and fingers are pointing in every direction. Let’s try to boil this down to just what the problem is shall we?

Let’s start with Todd Haley. If you need a microcosm of how his season has gone then just pull up the tape of the Steelers’ two-point conversion fiasco. It was bad enough Ben Roethlisberger needed to call a timeout but it was compounded by the fact they took a delay of game penalty COMING OUT OF THE TIMEOUT!

Two sources have confirmed to me that the play called was one that was installed just this week and that not everyone on the offense was on board with it. If that’s true, why was this allowed to happen? Where was Mike Tomlin in all of this?

Regardless, this is but one issue for Haley. His play-calling has become predictable and it lacks creativity. How many more times will he try the end around to Martavis Bryant before he realizes it just isn’t going to happen? The offense ranks near the bottom in third down conversions and in red zone success and is scoring just 20 points per game. For an offense being paid over $100 million 20 points per game isn’t going to cut it.

Any analysis of the failings of this offense must include Ben Roethlisberger. He has been inconsistent and he has been unable to connect on the deep ball that he was once so good at throwing. Despite reports that he and Haley put the gameplan together each week I’m starting to see a clear disconnect which may signal they are just not seeing eye to eye despite what they say publicly.

Roethlisberger faces the daunting task of trying to keep everyone happy. Getting Antonio Brown, Martavis Bryant, Le’Veon Bell and others enough touches isn’t easy. When you see him forcing throws to Brown, that is exactly what is happening. He has to be patient and take what the defense is giving rather than trying to force things. At this point in his career, Big Ben needs to facilitate and distribute and not try to do too much. That’s tough to ask though of a guy so used to doing everything.

The offensive line and tight ends carry some level of blame here as well. Jesse James is a good, number two tight end. He is not a starting tight end in this league and his lack of in-line blocking ability is evidence enough. He struggled to lock down blockers on the edge Sunday and those problems disrupted the entire flow of the running game. James is far from the only problem however.

Outside of Maurkice Pouncey and David DeCastro, the rest of the Steelers’ line has been inconsistent. Alejandro Villanueva routinely comes off blocks too soon and gets beat at the point of attack. Go back and watch the Bryant end around for evidence of this. Ramon Foster has become inconsistent in his blocking and Marcus Gilbert has struggled with injuries.

When I watch this offense I see a combination of problems. It starts and ends with Haley and trickles down from there. It’s like seeing ten guys on one page but one guy on the wrong page. In other words, the unit is close to clicking but there are cylinders that aren’t firing.

At 7-2 there are few things to complain about but you have to see the forest through the trees. The goal is to get to the Super Bowl, not just win the division or get home-field advantage. The current version of this offense won’t make it through the woods though if it doesn’t start clicking regardless of who is to blame.