Good Tuesday to all of you Steelers’ Fans out there.

As some of you know I was in Pittsburgh for the game on Sunday and purposely left my laptop at home. Therefore, now that I’m back, this is the ‘morning after’ piece I usually write after games. It’s just that it’s coming the morning after that. Hope everyone can follow that.

Huge thanks to Craig Scott for being my amazingly gracious host in Pittsburgh. Many of you have asked about him since he’s been off twitter and I can assure you he is doing fine. Also shout-outs today to Kenny, Dane, Tracy and Melvin!

One more shout out this morning to Nathaniel Bodnar for his donation to the website. Can’t thank you enough!!! If you’d like to donate, just click the ‘donate’ button on the homepage.

There were two big topics of discussion coming out of the game yesterday on talk radio as I left the Burgh. One was the fact that the Steelers scored too soon on the fake-spike TD to Antonio Brown with :42 remaining. Just stop it. You score when you can score period. There was no guarantee the Steelers would have been able to get a touchdown had Ben Roethlisberger spiked the ball there. Ridiculous conversation quite honestly.

Second, was the decision to go for two on the second touchdown. Personally I didn’t like it and here’s why. Once you miss a two-point conversion, you can’t keep chasing points, especially in a game that went as expected and was a shootout. By kicking the PAT there, the Steelers would have been up 13-3 meaning the Cowboys would have needed a TD, PAT and field goal to tie. Instead, that combination could have given the Cowboys the lead and would have likely forced Tomlin’s hand to again go for two which he did. Sometimes you just have to play it safe.

Tweet of the Day… Not sure when this was taken, but it looks like it may have been yesterday. Kudos to Ben for taking the pic on a day when he otherwise may have wanted to get in and out of the mall.

@_BigBen7 thanks for making my sons day. pic.twitter.com/RUfYXPiHn1

Mike Tomlin will hold his weekly press conference today and it sounds like there may be some bad news. Ron Cook tweeted that Cam Heyward’s pectoral injury could require surgery.

If you missed it, this was my piece last night on the Steelers’ problems coming to a boil.

I’m not buying the hand injury as the major reason why Sammie Coates isn’t playing on offense. Is it part of the issue? Probably, but his lack of route knowledge and being able to adjust on the fly is the major problem.

The winning TD run by Ezekiel Elliott was a fitting end for the Steelers’ D. In that one play, we saw a microcosm of the season. Missed assignments, poor tackling and poor angles. Ugh.

Have a great day Steeler Nation. On to Cleveland. 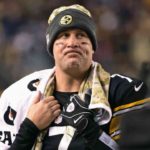 Steelers’ Misfortune Has Been Brewing for Some Time 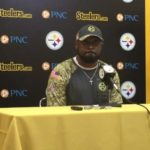 Tomlin’s “Popcorn” Discipline and AB’s Stroll Out of Bounds