This coming Sunday is a pretty big game for the Pittsburgh Steelers. For some it’s a rivalry game and for some it’s a revenge game for what happened two weeks ago. The reality is that this could be a winner-take-all game for an inside track to a playoff spot. Should the Browns win they would sweep the Steelers and have the tiebreaker over the Steelers should the two tie with the same record. Should the Steelers win, it would put the Browns in a “backs to the wall” situation in terms of record and tiebreaker. Pittsburgh will need to rely on the veterans this week to hammer away at the idea that guys can’t lose focus. There will be players looking for some form of revenge but they can’t risk 15-yard penalties and jeopardize the Steelers’ chances at winning. Be aggressive but be smart because the win is what matters here not retribution.

Any time you see or hear a comment from a player there must always be context. If we take the comment wrong, we might be missing how he actually said or intended it. Steelers’ running back James Conner was asked about Duck Hodges big play to James Washington and said, “It was a nice throw but James did all the work.” I have yet to uncover the context in which this was said but on the surface it’s a dumb comment and one that can easily divide a team. I certainly hope this was tongue in cheek.

Tweet of the Day… Nicole could not be more right. And she’s awesome.

It’s too early for you all to be yelling at everyone. Settle down and have a cup of coffee. For god’s sake.

The second day of the work week means that Mike Tomlin will give his weekly press conference to update us on injuries and to not doubt address myriad questions about the Browns and the incident from two weeks past. This is also the usual day off for the players as well.

There’s a natural regression any time you lose Maurkice Pouncey to injury or in this case suspension and that was the case quite often on Sunday. B.J. Finney is an outstanding guard who would be starting on many offensive lines in the league. As a center however he struggles with quicker defensive tackles who get inside of him and begin to ruin the play with penetration. With Myles Garrett gone this weekend, I think  the Steelers may be able to help inside a bit more which is good. And to be really fair, the Steelers were still able to run for a lot of yards on Sunday and if they’re going to win against Cleveland we need more of the same.

I’ve watched more of Mason Rudolph already this week than I’d like to admit and I really believe what is happening to him is that there’s too much on his plate. I hate the analogy given his last name but I really do think he’s like a deer caught in headlights. He’s so busy trying to figure out coverages pre-snap that he just isn’t processing when things change at the snap. That leads to indecisive play which for him (he already has heavy legs IMO) is why the rush gets to him and he’s left to be sacked, hit as he throws or throws poorly. Duck Hodges will provide the mobility that’s needed in these situations but that’s not a guarantee of his overall success. 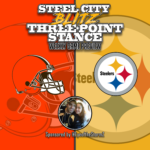