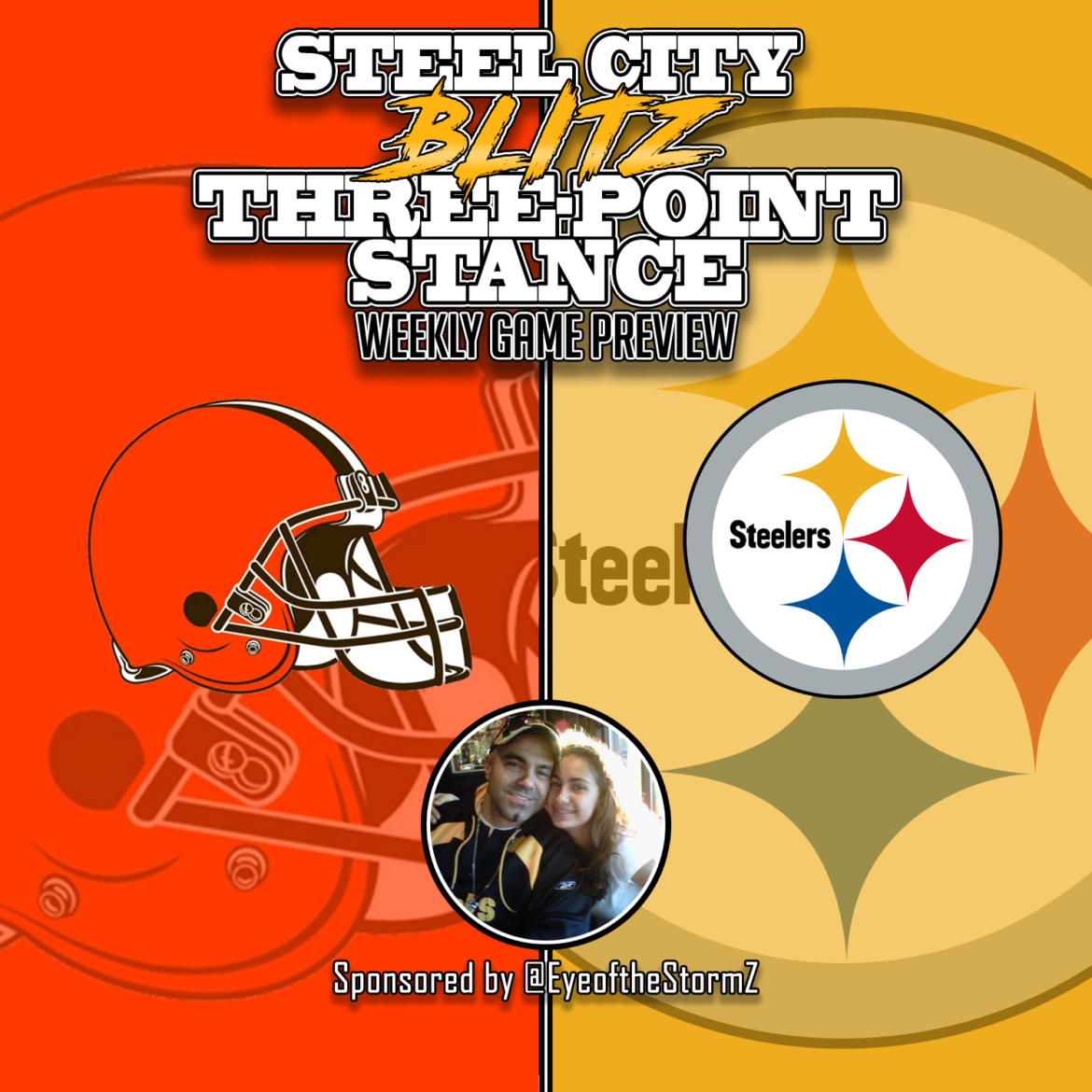 This is the Steel City Blitz Three-Point Stance. Your quick-hitting reference guide to everything you need to know about the Cleveland Browns and Pittsburgh Steelers in this week 13 matchup. The TPS is sponsored by @EyeoftheStormZ.

Weather: 56 degrees and rain at kickoff

Last Week: The Browns defeated the Miami Dolphins in Cleveland 41-24 while in Cincinnati the Steelers beat the Bengals 16-10.

TV Coverage in Your Area: Check out the506.com to see if you’re getting the game!

This Week in the AFC North: San Francisco at Baltimore, NY Jets at Cincinnati

What You Need to Know: The Browns have been flagged a league-leading 121 times through 11 games… Mike Tomlin is 20-4-1 all-time versus the Browns… Devlin “Duck” Hodges is making his second career start. He won his first one in Los Angeles earlier this season… The Steelers lead the NFL in sacks through 11 games with 38… Pittsburgh has won 15 straight games against Cleveland at Heinz Field.

What’s at Stake: The Browns have won two straight over the Steelers and Dolphins at home in Cleveland but now must go on the road where they are 2-3 on the season. A win gives the Browns a season sweep of the Steelers and a significant tie-breaker over them. A win for the Steelers means they stay in the playoff race while providing the Browns with a death knell it would be hard to overcome.

Finish Mayfield. In the first matchup two weeks ago the Steelers were able to get pressure on Browns’ QB Baker Mayfield. The problem was that Mayfield was able to escape on three or four occasions in which he extended and made key plays. On Sunday, Cam Heyward, T.J. Watt and company not only have to get pressure but they have to finish the job too. Mayfield is sacked at a much higher rate on the road than he is at home so the Steelers have a start right there. Interior pressure is important in flushing Mayfield out to the right or left and that’s where he has to be finished. His receivers are too good to let him extend plays as we found out before.

Make Them Miss Myles. The Browns had a massive advantage with Myles Garrett against Alejandro Villanueva and with him gone the Steelers have to make them pay. Whether they run the ball to the left with David DeCastro pulling around or make Garrett’s replacement over-commit on misdirection Randy Fichtner should design plays to take advantage of what is no longer a weakness. I do not expect the Browns to change things up much defensively in terms of how they do things. I think you’ll see single-high safety and eight or nine guys in the box so why not attack where the Browns will be weakest?

Make Plays Around Duck. Any time you are starting your third-string quarterback, the expectation that he will lead your team to victory is asking a bit much. What needs to happen on Sunday is that everyone around Duck Hodges has to do their part to make life easier on him. If the game is put on his shoulders then the outcome is likely not going to be very positive for the Steelers. What does this look like? It means the running backs have to pick up blitzes and they have to get positive yardage when running the ball. The offensive line needs to limit penalties and avoid putting Hodges in second and third and long situations. Receivers need to work back to him especially when he’s on the move and they need to catch the ball in order to keep the sticks and clock moving. No gameplan is perfect. There will be mistakes and setbacks but the offense can keep the kid in the game and keep things positive then that goes a long way towards a victory.

Prediction: Where to begin… The Steelers will have no Maurkice Pouncey due to suspension. JuJu Smith-Schuster will not play due to a knee injury and James Conner is unlikely to play as well. When you take three important offensive weapons like that away AND turn to your third-string quarterback, that doesn’t leave me with a ton of confidence. Emotions will run high on both sides and the Steelers have to be more disciplined than the Browns because this game carries significant, postseason implications for both. I believe the Steelers’ D will play well and I believe this game comes down to the final quarter but I don’t see the Steelers having enough fire power to match the Browns.