TGIF Steelers’ Fans! Please take a moment to thank a veteran today. It’s a very simple thing to do. Just say “thanks.”

Steelers’ Center Maurkice Pouncey had a surgical procedure done early in the week on his snapping (right) hand. Despite not practice so far this week, Pouncey is telling the media he will be a full participant today in practice and he will play against Dallas. He also mentioned he was a little unhappy with not being allowed back in the game on Sunday. Pouncey’s presence will be huge on Sunday. Dallas has a very formidable front four and his presence is huge not only for blocking but for the line calls as well. If he can’t go, it means B.J. Finney at center. I believe Finney is better at guard. He was OK at times in relief of Pouncey against the Ravens but he got beat a lot too.

Speaking of the Ravens… They continue to do what the Steelers often cannot. They defeated a lesser opponent and didn’t make it real dramatic either. They knocked off the winless Browns 28-7 last night in Baltimore. Let’s face it; that’s a game where the Steelers in recent years would have struggled.

It sounds more and more like the Steelers will have Ladarius Green on Sunday. I’m not holding my breath but all signs point to it happening. This would be a huge move for the Steelers. Dallas struggles worse than the Steelers do at covering tight ends.

Tweet(s) of the Day…. I think you’ll get the message.

Have to wonder if Deangelo Williams has played his last snap w #Steelers. @MarkKaboly reporting meniscus surgery Wed. Out indefinitely.

Clearly, DWill was not happy about what was reported. Kaboly later tweeted that Williams had knee surgery but NOT on his meniscus. Kaboly also pondered whether Williams had played his last game as a Steeler. Sometimes guys should report and not guess. Leave that to us bloggers.

I’m glad to hear that guys in the locker room are “focused” and “pissed off” but that means little until I see it on the field. I prefer actions rather than words.

‘Nail the Number’ this week. Guess the total number of tackles for Ryan Shazier AND the total amount of yards passing for Ben Roethlisberger (+/-3). Get your entry in by 8pm Eastern Saturday.

Here are my previews of the Cowboys’ Offense and Defense.

Have a great weekend Steeler Nation! See you at Heinz Field! 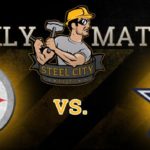