On Wednesday the Pittsburgh Steelers announced that should fans be allowed in Heinz Field this season that they must practice social distancing and wear a mask. The amount of people bitching about this is, for lack of a better term, nuts!! I’m sorry but if wearing a mask means we get to watch the Steelers then I’ll put myself in a damn bubble! I really do understand that many people find masks uncomfortable. I’m one of them! Remember, the ultimate goal is keeping everyone safe but a close second for me is getting the Steelers to play meaningful football too.

We recorded episode 178 of the SCB Steelers Podcast presented by DEK Roofing Inc on Wednesday night. With Ian celebrating the birth of his daughter, Ellie Finnerty joined Ben and I to discuss all the latest NFL and Black and Gold news. Good stuff and as usual we had a good time doing it!

Throwing a Flag on the NFL

After the National Football League made the decision to enforce social distancing after games AND ban jersey swapping I felt compelled to write this piece last night. The NFL has navigated the pandemic pretty well until this boneheaded decision.

Admit it. You like when your Steelers’ players are also “good people” don’t you? Zac Banner, whether he becomes the new right tackle or not, is one of these guys. His maturity and willingness to take on issues publicly is more than welcome in my book. He wants people to be better and I think that’s a fair request.

The NFL announced yesterday that players may choose to opt out of the 2020 season. Not all of us have this option in our lives. I’m scheduled to go back into the classroom in another month and while I do have a “choice” I’m in no position to not work. I’m not going to judge these guys. Imagine Ben Roethlisberger for a second. He has a wife and three small kids. How can you not take them into account when making the decision to play? Personally I don’t think many players will opt out but I’m not holding a grudge if they do. 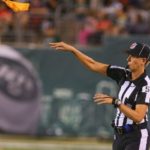