Our Training Camp Previews begin with a look at the Tight End position. Overall, the position has undergone some changes since last year with one significant move. Xavier Grimble is gone and Eric Ebron, a former first round selection, has arrived. How does this position shake out? Let’s take a look. 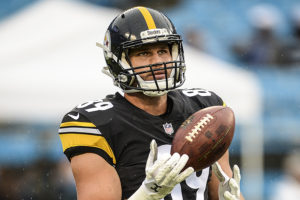 Many will want to pile on McDonald for such a serious drop in numbers from 2018 to 2019 but that would be naive. Once Ben Roethlisberger went down in week two, McDonald’s numbers were bound to decrease but no one saw this coming to this extent. McDonald will continue to be the best blocker of all the tight ends on the roster and I expect to see him on the field more than many expect with Eric Ebron brought in. I look for not only two tight end sets but don’t be surprised if you see more of McDonald early on as his familiarity with the offense will be prized.

A fifth round pick out of Michigan in the 2019 Draft, Gentry saw limited action during the season. At 6’8″ he provides a potentially enticing target in the red zone and in short yardage situations but this was a selection we were not crazy about. Gentry is not a good blocker and often looks like the former quarterback that he was when doing so. I think he’s in a battle for the third spot on this roster and there is no guarantee he’s it despite his draft status. 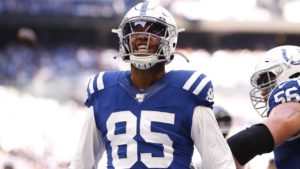 Ebron is a highly-athletic guy who can take it to the house any time he catches the ball. That has been the biggest problem for the former North Carolina Tar Heel though. His inability to consistently catch balls has been a problem for him but he has shown some glimpses of improvement. In four seasons in Detroit, he averaged 46.5 receptions per season. in his first season (2018) in Indianapolis he recorded 66 receptions. Naturally, that number took a drastic hit with the retirement of Andrew Luck as Ebron caught just 31 balls in 2019. The one standout item from his 2018 season was that he caught 13 touchdown receptions. He entered that season with 11 TD receptions combined.

Due to the pandemic, Ebron has not had the normal environment with which to learn the Steelers’ offense and work exclusively with Ben Roethlisberger. This is likely going to lead to a slower development than hoped. Being a veteran however should help. He will likely enter the season as the number one tight end but like I said above, I don’t think McDonald will be stuck on the sidelines. Big Ben likes him, he’s a solid blocker and is still a receiving threat. My gut tells me Gentry stays as the third TE simply because Kevin Colbert doesn’t like to admit draft mistakes. Kevin Rader is a better blocker and if it were up to me, he’d be the pick but I doubt that happens. CSW is a guy who looks the part. He’s a big, physical man but the transition from rugby to football has not happened as quickly as hoped. I’m hopeful but I don’t see this being the breakthrough season we hoped for. 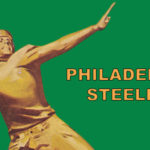